December 30, 2015
I'm delighted that Jane Campion's now Dame Jane. Here are my other local highlights from 2015. What have I missed?

This is undoubtedly the highlight of my ten years' thinking and writing about this issue, as well as of 2015. First, at the annual Big Screen Symposium, producer/director  Chelsea Winstanley made  unequivocal statements about the need for gender equity in New Zealand Film Commission's allocation of taxpayer funding. 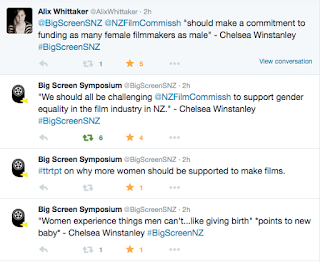 Huge respect to Chelsea, the first high-flying New Zealand woman director/ producer to speak up publicly and staunchly on this issue, except for Dame Jane. May others join her in 2016.

Then two men directors spoke out, writer/director Jonathan King and actor/writer/director Jemaine Clement. The first I noticed was Jemaine, in support of the Australian Directors Guild's call for gender equity.

@devt I would absolutely support this in NZ! https://t.co/BxeSuLrlGi
— Jemaine Clement (@AJemaineClement) November 2, 2015

Best known as director of Whale Rider and North Country, 'our' Niki Caro directed this year's McFarland, USA (not yet released in New Zealand). It is 57 on Box Office Mojo's 2015 Box Office Results, has grossed almost $45m and is one of only five women-directed films this high on the list. The others are Fifty Shades of Grey (16); Pitch Perfect 2 (12); The Intern (57); and Jupiter Ascending (54).  That's pretty amazing.


But I was even more excited by Jessica Chastain's account of life on set with The Zookeeper's Wife, also directed by Niki, published in The Hollywood Reporter–


I'm in Prague filming a movie called The Zookeeper's Wife with director Niki Caro. I can't tell you — it's amazing. I've never been on a set with so many women. We're not even 50 percent of the crew — we're probably something like 20 percent women and 80 percent men — but it's way more than I've ever worked with on a film before. There are female producers (Diane Levin, Kim Zubick and Katie McNeill), a female screenwriter (Angela Workman), a female novelist (Diane Ackerman), a female protagonist and a female director. I've never seen a female camera operator like Rachael Levine on one of my films. And I've never, ever seen a female stunt coordinator like Antje "Angie" Rau.

Niki Caro hasn't spoken up about gender equity in the allocation of taxpayer film funding and I so wish she – and others – would. But it's great to see her doing so well outside New Zealand and supporting women who work in film.

The Outlook For Someday 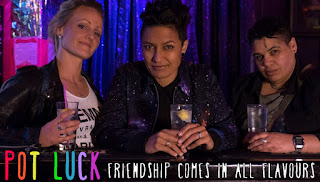 It's great, written and directed by Ness Simons.


I think  we're seeing more women-directed films in our cinemas and that's ace. It's felt almost-normal to be able to watch one woman-directed feature after another, down the road at the Paramount or elsewhere. Just before the holidays,  it was Jocelyn Moorhouse's The Dressmaker, that I intended to follow with Leslye Headland's Sleeping With Other People. But I needed space to reflect on The Dressmaker, so I didn't. I still find distribution mysterious: why has Gina Prince-Bythewood's Beyond the Lights not reached New Zealand, for instance? And McFarland, USA?


Film Fatales 'is a global network of women filmmakers who meet regularly to mentor each other, share resources, collaborate on projects and build a supportive community in which to make their films'. Itwas founded in New York and now there's a Wellington chapter. A big thank you to Anita Ross for taking the initiative. 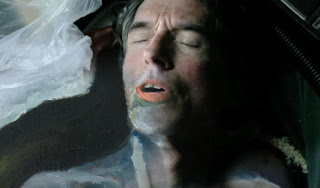 This short film has travelled all over and won many awards. But perhaps most significantly, it won coveted Lightbox Best Film Award at New Zealand's Show Me Shorts and this made Alyx eligible to enter The Tide Keeper into the 2017 Oscars®. Fingers crossed she'll do that.

Alison Maclean is back here, with The Rehearsal! 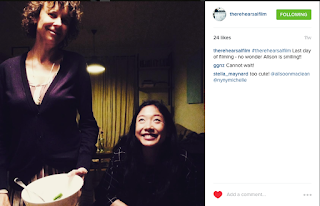 What a thrill that Alison came back to direct Eleanor Catton's first novel, The Rehearsal, after writing the screenplay with Emily Perkins, best known as a novelist.

I don't know when The Rehearsal will be released, but am looking forward to it. And a whole lot of other things in 2016.

A big thank you to all of you who've supported my work this year, as interviewees and contributors, in emails and in Facebook 'likes' and conversations, through tweets (@LittleFairyFilm wins the most supportive tweets award!), through messages and phone calls and in meetings. You're always a highlight. I love knowing that you're out there reading this and am always especially touched when you tell me you find something useful, tell me I'm mistaken, share your stories with me. Every good wish to you for 2016!