Most of these posts are also on Medium, where they are much prettier!

NZ Update 3: WIFTNZ How does WIFTNZ support women writers and directors? What else could the organisation do? (February)

Treat Her Right! The equal pay campaign in New Zealand and its associated video, directed by Loren Taylor. (February)

Women Are *Not* the Problem? or – more prettily and almost identical – on Medium.
All about New Zealand Film Commission, New Zealand on Air and Screen Australia initiatives. I had to bribe myself to write this. And plan to update it. (July)

A Lorde #fangirl Preps for #Oscars16  That would be me. (February)

A Glimpse of the Future, With Inspiring Stories  (December)

Dear Jemaine  My essay for Women Screenwriters: An International Guide, with love to Jemaine Clement (November)

Hash Perambalam and 'Not Like Her' (June) A finalist for New Zealand's Short Film competition of 2015.

Michelle Joy Lloyd's Sunday  (December) Made in Christchurch, this self-funded film was launched simultaneously in New Zealand cinemas, online, on DVD, on TV and on airlines. Michelle has clear ideas about what she thinks should happen in relation to women directors in New Zealand; and has co-founded a women's film collective.

How Can 'Female Directors in European Films' Help? (November) Looking at information from around the world and how it might help women directors, through an understanding of shared cross-border experiences and opportunities.

And THEN the NZFC posted a report, NZFC Feature Film Development Funding Information on Gender 2009-2014 . What could be better? Will Jane Campion's advocacy and this public data make a difference?

The Patriarch and Matriarch Producer Robin Scholes (September)
Robin's view on women directors and a list of recent films directed by Maori and Pasifika men.

Safety in Paradise? New Zealand International Film Festival and the New Zealand Film Commission funding of it, stats and discussion within a much longer piece (August)

Disappointment, Gratitude and A Call For Help Films by and about New Zealand women in the New Zealand International Film Festival 2014 and statistics 2009-2014 re women scriptwriters funded to develop feature film scripts by the New Zealand Film Commission. Includes anecdotal material from generous responses to questionnaires sent to local women writers for film, television and other mediums. (June)

An Autumn Multi-Tweet & Two Question Day One of the questions is about the New Zealand Film Commission's new Te Ara initiative for Maori and Pasifika filmmakers. Will the initiative benefit women? (March)

Make My Movie: Women's Horrors To Vote For (October)

Annie Collins – New Zealand Editor Extraordinaire Annie's edited many docos and features and won many awards. She's legendary, in particular in her insistence on the centrality of kaupapa and ethics (September)

The New Zealand International Film Festival - the New Zealand Directors My fourth year of checking the festival's stats, which continue to reflect New Zealand's failure to produce significant numbers of films by and about women (July)

Dana Rotberg and White Lies|Tuakiri Huna Partly about another immigrant woman director's experience of New Zealand, and her ethics when working with Maori (June)

Nathalie Boltt, Clare Burgess & 'The Silk' Immigrant women talk about their experience in New Zealand (May)

A New Zealand Problem, Or Two A comprehensive list of features made in New Zealand by New Zealanders over the last decade (November)

New Zealand Update (2) - State Funding For the first time, 50% of features that NZFC funds for production have women directors (though one woman director is shortly replaced by a man); and women finalists predominate in the Script Writer Awards NZ Best Unproduced Feature Script Award (August)

Golden Age for Women Who Make Movies (2)? Compares New Zealand stats with other parts of the world (August)

Will There Be Blood? and No Blood, Little Sleep & a New Bechdel Test Film – my experience of the 48 Hours competition) (May)

Kirstin Marcon and The Most Fun You Can Have Dying (April)

2010
Too much dialogue? Statistical update (December)

I feel the earth move under my feet: Chris Vogler and GIRLS LIKE US Chris Vogler visit (NZFC sponsorship) (September)

The Big Picture: Could I Do That? – see comments re V48Hours (June)

2009
Looking Towards a New World (December)

New Zealand Women Playwrights (May) playwright Branwen Millar on the dismal statistics re women playwrights in NZ. The link to her Playmarket magazine article is dead, but probably can be accessed through libraries.


Erica Duthie and I created a women's film festival in Wellington, 2004, Mahi Ata Mahi Ahua: Women's Work in Film. Its associated site, now closed to additions, gives details of some New Zealand women filmmakers and their work. That was my first close involvement with women's filmmaking.

I started Wellywood Woman during my PhD research 2006-2009, first at the Victoria Management School and later at the International Institute of Modern Letters, funded by a Women in Leadership Scholarship. My thesis, except the feature script for Development-the-movie (Chapter 6) is available online here, and my earlier Report is here (scroll down). I was motivated by my perception that, although women are equally represented and do well in all the creative writing courses at the International Institute of Modern Letters, the women who write for the page continue to succeed after they graduate but the women who write for the screen tend not make the transition to the 'real world' in the same way. Why was that? Why is that? What are the obstacles and where are they? What helps women who write (and direct) for the screen succeed?

Because no New Zealand state funder had ever recorded gender statistics, I collected them for my thesis. In 2010 I made an update for Women in Film & Television, and then revised it for the Development Facebook notes, here. These images are associated with that revision. They show applications and approvals for feature project development, made to the New Zealand Film Commission in the five years 2005-2009, at the Staff Committee/CEO, to the Development Committee and to the Board. 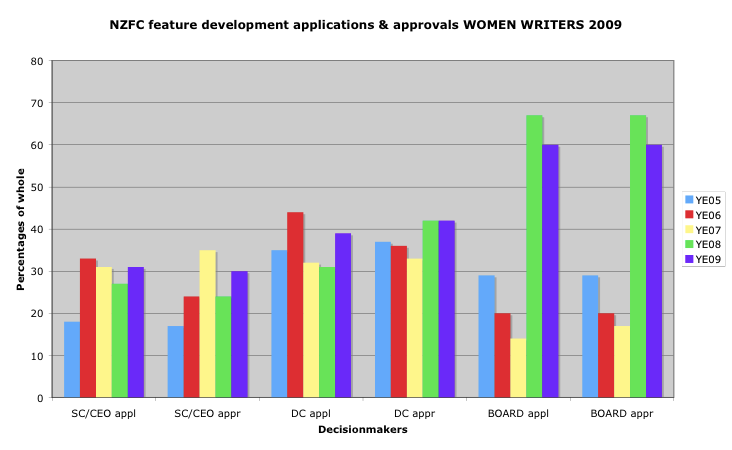 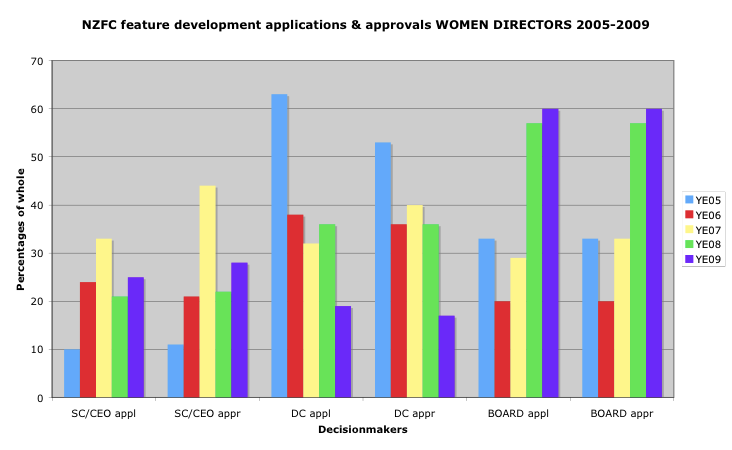 Some of the posts listed here update that work. And I loved it in late 2014, when the New Zealand Film Commission, after I made several Official Information Act requests released an elegant update covering the same ground from the following years:  Feature Film Development Funding Information on Gender 2009-2014.

Some of the posts below simply record women directors' diverse views about gender issues. I usually ask at least one 'gender' question when I interview a director, because I learn a lot from what each of them says. Some posts address institutional inequities, at the New Zealand Film Commission, the 48 Hours and Make My Movie competitions or at the New Zealand International Film Festival. Others acknowledge gender equity achievements, for example at South Pacific Pictures. Throughout, I often introduce and question my own experiences, sometimes more substantially than others – perhaps as a filmmaker participant (48 Hours Competition) or as a writer or audience member (at Readers and Writers Week).

By mid-late 2013 I had more or less abandoned hope for change in New Zealand and was Moving Forward, to focus on exciting initiatives outside New Zealand. But then, in late 2014, I became hopeful again, as recorded in Directors & Editors Guild of New Zealand & WIFT Take Action, Thank You Jane Campion and Jane Campion: "Let's Really Say 'This is Enough'".

...shares the findings for a research project on how gender representation in New Zealand-produced television content viewed by children aged 12 years and under can influence girls’ and women’s employment choices in later life.
The analysis of television content was based on a similar study conducted by Smith and Cook at the Geena Davis Institute titled Gender Stereotypes: An Analysis of Popular Films and TV (2008).