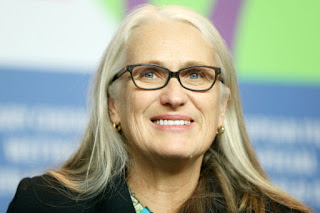 This is a special addition to her other New Zealand honours, like her honorary Doctorate of Literature from Victoria University, back in 1999.

The announcement I read didn't say much. So here are some of the things I celebrate about Dame Jane Campion.

I celebrate her global reach as a teller of powerful onscreen stories, of course. From her first short film Peel (1982), which won the Short Film Palme d'Or at the 1986 Cannes Film Festival. To Sweetie, one of my all-time faves. To The Piano, which won many awards, including – the only woman winner to date – the Palme d’Or in 1994 and the Academy Award for Best Original Screenplay, one of only seven ever won by women. Dame Jane – doesn't it sound perfect (partly because adding 'dame' in this context carries a teeny Raymond Chandler-type suggestion?) – was also nominated for an Academy Award as Best Director for The Piano, the second of only four women ever. To all those features after that. To her most recent work, Top of The Lake, which she wrote with Gerard Lee, directed with Garth Davis and executive produced.

I also celebrate because Dame Jane's work provides us with a consistent inquiry into women’s lives. It always embodies her well-known question… "Women may be 50% of the population but they gave birth to the whole world, why wouldn't we want to know what they think and feel?", and is absolutely about much more than women-as-mothers. I celebrate that her inquiry is so wide-ranging. Not long ago, I saw her After Hours (1984) for the first time, when it was briefly online, the most nuanced short film about sexual harassment I've ever seen.

Each member took a particular area of responsibility. For instance, Sir Peter Jackson and Fran Walsh identified early talent and connections as theirs. James Cameron and Jon Landau were keen to help with American connections. But Dame Jane's interest was gender equality, and only gender equality, no surprise to anyone who's familiar with her public statements about women in film, over many years and all over the world.

When the board held a press conference after a meeting at the beginning of this year, she confirmed that one of her goals was encouraging more women to become filmmakers and restated her interest in gender equality in strong terms–


It's kind of completely disgusting and teeth-clenchingly irritating that [only 9% of New Zealand films are directed by women]. But that's not just New Zealand, it's a worldwide issue. And my challenge to this group, the board, is "Let's be the first. Let's really say 'This is enough'".

This year, Dame Jane visited Anna Serner at the Swedish Film Institute, the doyenne of best gender equity practice in film, and was said to have returned to Australasia 'an action plan'. Although New Zealand hasn't been first to say 'This is enough' and the New Zealand Film Commission's – and Screen Australia's – gender initiatives are disappointing in comparison with the Irish Film Board's recent initiative, these facts say more about how entrenched sexism is in Australasia than about Dame Jane's commitment. Screen New South Wales, the film fund for the state of New South Wales, based – like Dame Jane – in Sydney, does now have a holistic gender equality target and this is probably partly due to her work, as well as to that of the Australian Directors Guild's Women in Film Action Committee.

I also celebrate Dame Jane's contributions to festivals and symposia. Often, people are honoured for their charitable work and I think it's important to celebrate her generosity with her time and with sharing her insights, with individuals and in groups. Often, she's done this not to promote her own work or herself, but, it seems, for the sheer joy of it. Internationally, for instance, she was the head of the jury for the Cinéfondation and Short Film sections at the 2013 Cannes Film Festival and the head of the jury for the main competition section for the 2014 Cannes Film Festival. And in an example closer to home, in New Zealand, two years ago she gave an extraordinary day of workshops in memory of her father Richard Campion, the director of theatre and opera. There, I experienced her curiosity, her generosity, her playfulness and her joy-in-the-work, her openness, her laughter, for myself – a glorious day. This year she gave a directing masterclass at the national Big Screen Symposium, as well as appearing in conversation with Philippa Campbell, about her process in relation to creating, writing, directing, funding Top of the Lake.

And there's more to come. The second series of Top of the Lake and who knows what else. Magnificent.

Notes
When I was looking for images to include I found a website that's new to me, Anna's Eye – Visionary Women in Film. It has some excellent Jane Campion content, including the With The Filmmaker-Portrait of Jane Campion clip below and an account of a workshop that Jane Campion gave at an Italian film school, where her first question was "Who of you practises yoga, please raise your hands!" A great read!

As you can probably tell, I love watching Jane Campion. I love listening to her. Wish I could find a clip from or a link to Clare Young's From the Bottom of the Lake (2013). But these three are wonderful, too.

1. Excerpt from Jane Campion in conversation at the Big Screen Symposium 2015, courtesy Script to Screen.