The Aotearoa New Zealand film and television world is being transformed by awareness of, and increasing commitment to, gender equity. Here are some lovely little things I’ve cherished since my last update.


1 The Māoriland Film Festival in Ōtaki (a beautiful small-town-by-the sea, north of Wellington) has announced its first three awards and released its stats.

The awards are all People’s Choice awards and films directed by women won two of them.
Michelle Latimer’s RISE: Standing Rock was Best Documentary feature, from a docuseries that investigates the ongoing environmental rights struggles that continue to be faced by Native American and indigenous citizens. The episodes played at Māoriland, Sacred Water and Red Power, are situated at Standing Rock.

Amie Batalibasi won Best Short for Blackbird, which tells the story of Solomon Islander siblings, Rosa and Kiko, who were kidnapped from their island home to work on a sugar cane plantation in Queensland, Australia, in the late 1800s.


Michelle Latimer is a Métis/Algonquin filmmaker, programmer, actor, and activist and there’s a Women & Hollywood interview with her here. I hope the award means that RISE will reach cinemas all over, perhaps accompanied by Blackbird.

Amie Batalibasi, an Australian Solomon Islander, won this year’s Merata Mita Fellowship from Sundance. Her acceptance speech and my interview with her are here.

And as for the stats, the Māoriland Film Festival is a shining beacon for festivals worldwide: 60% of its selected films were directed by women. Plan now, for next year’s fest, in March!

2 The Topp Twins have announced a new feature, The Long Drop, to be directed by Felicity Morgan-Rhind. Like part of RISE, it’s about water. It looks wonderful, and we can help them raise development funds, on Boosted.

3 In her speech at the New Zealand Film Awards, in this clip, as she accepted her award for Services to Cinema, veteran filmmaker Gaylene Preston supported a 50:50 gender split in taxpayer funding allocations, yay!, for the first time publicly, as far as I know.

Because these two voices have joined Jane Campion’s and Chelsea Winstanley’s (and the women and men who publicly supported Chelsea) I think we’ve reached the tipping point here in New Zealand — it’s now safe for any and every director to speak out. In conjunction with the changes I’ve documented in earlier posts in this series, this shows that New Zealand’s silence and inaction about gender inequity in film and television is over.

This is what Niki said, as reported in the Huffington Post, while she promoted The Zookeeper's Wife, just after it was announced she'd direct live action Mulan for Disney–

“It was less ‘Why can’t I?’ and more ‘What the fuck is going on here? Why can’t we? Why are we not being invited?’... My gender should have absolutely nothing to do with it, at least in discussing the quality of my work, in which case I’m very proud to be working in a feminine way.

But now that [The Zookeeper’s Wife] is out, I look at the statistics on female directors, and now it’s time for me to speak up. I’ve been silent for personal reasons, but now I’m very happy to say publicly that it’s a shameful statistic. Just the sheer ignoring of 50 percent of the available skill and talent and vision and tenacity and ambition appalls me...

This is extremely exciting because I know that there are going to be so many stories that will be coming out of the woodwork, stories to be discovered about extraordinary female achievement. I’d like to think there are legions of female filmmakers ready to step up and tell them and audiences are going to love them.”

4 And then there's the New Zealand Writers Guild (NZWG)'s SEED and SEED Advanced application process, open from now until 12 noon on 2 June. This is development funding for writers only, who don't have to have a producer attached.

I love it that SEED applications are blind read. But, in a convo on the Development Facebook page, back in February, a writer/director wrote “I agree the blind reads are great but it still seems mainly men are applying so would be good to have initiatives that really push and encourage women and other minorities to apply. Diversity on screen really should start with the story and characters...”

So I confirmed that fewer women than men have been applying and was glad the guild's Executive Director, Alice Shearman, then offered to be interviewed about the issues. Coming soon! 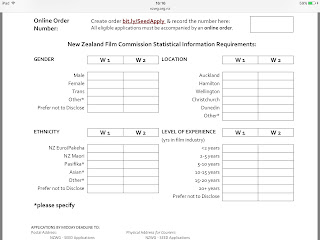 This is terrific. It could do with a few more categories, like Disability, Sexuality, Age, but it's a fine and transparent start, an initiative that “push[es] and encourage[s] women and other minorities to apply” and acknowledges intersectionality. Having this form helps invite diversity, I think, especially if the demographics among the readers/assessors broadly mirror the demographics among the applicants. But I also know from other contexts that being a woman doesn't necessarily mean that I and other women assessors will appreciate and respond skilfully to the work of women whose content and genres and experiments have unfamiliar elements.

And the supportive presence of this form and diverse assessors doesn't guarantee women applicants.

Very recently, The Black List posted an article about why (non-professional) women writers submitted screenplays to its site, where writers pay to upload their scripts for rating, in much lower numbers than men. It found that when the site collected demographic information, 72% of those who submitted were men and 28% women.

The Black List concluded that women are less likely to invest in a poorly performing script (to keep a script active on the site costs $25US per month); are likely to submit only when a script is likely to score well; and may submit our work less often because we tend to feel that there is implicit bias against women writers and our writing. (Certainly, we do apply when we feel welcome and believe that there is no bias. For example, producer Imogen Banks and writer Alice Bell devised a programme called ROAR, for novice women screenwriters, as part of Australia's Gender Matters. It attracted 1100 applicants for just 12 places.)

Could the Black List factors be active in the NZWG SEED funding applications too? What d'you reckon? Makes sense?

In my view, there's also the possibility that women have to be more careful with their money because we earn less and it's great that applications to SEED cost only $20 for NZWG members and $40 for non-members, with optional feedback available for $100.

5 And then there's the Script to Screen FilmUp selection, just announced. Script to Screen, like the Directors & Editors Guild of New Zealand,  Inspiring Stories, Outlook for Someday and
the Māoriland Film Festival, consistently achieves a diverse lineup among those to whom it allocates support. Is it possible that these organisations somehow communicate an inclusive culture, so more diverse people apply because they trust there is no implicit bias?

FilmUp is a high-end development programme for writers, directors and producers who have already shown considerable talent and tenacity in their work. Each participant is matched with a filmmaker mentor from NZ or Australia, and will attend a series of hub days that include round tables, workshops, and group work as part of the eight-month programme that is tailored to their individual needs.This year there are two places awarded to established feature filmmakers, who will work with international mentors.

And just look at the lineup! Three men and five women–


What a fantastic and diverse group! Warm congratulations to them all.

And wait, there's more! How about–

STUDIOCANAL’s Australia and New Zealand CEO Elizabeth Trotman has announced a new Australasian fund, called the Cultivator Fund, with a formal submission process, by invitation only; it will not accept unsolicited scripts.

STUDIOCANAL’s Nigel Forsyth has begun discussions with producers from across New Zealand. He says, “As the NZ film industry continues to grow, it is an exciting time to be working with local producers and script writers. This new development fund not only reinforces our commitment to support local content, it also allows us to further our existing relationships with the incredible filmmaking talent NZ has to offer.”
Elizabeth Trotman is excited: “We are thrilled to announce this investment to start fostering the fantastic talent in Australia and New Zealand. We want to identify, cultivate and create incredible stories for local and international audiences alike. We are already developing a family film, two biopics, a prestige drama and a romantic comedy.”

And she adds, good on her!– “A key focus for us is to include stories by and for women, taking important steps towards gender equality and female representation in the industry.”


7 And then there's the NZFC Ramai Hayward Wahine Māori Directors Scholarship. I was so disappointed that there was no Māori or Pasifika director among the three recipients of this year's Gaylene Preston Directors Award. If there were initially few Māori and/or Pasifika applicants, I hope plenty of Māori and Pasifika directors were warmly encouraged to apply, because of their indigenous status.

Applications for the Ramai Hayward Scholarship have just closed. Sending every good wish to everyone who's put her name forward and hoping for a Pasifika scholarship soon, along with initiatives that will benefit the many other groups of women whose worlds are under- or unrepresented in our films!

I hoped that 48 Hours would introduce a form like the New Zealand Writers Guild one and I asked, for writers and producers, for ethnicities etc. But no. This is how Ant sees it–

The problem is we struggle to get even the basic information from each team at the end of the weekend when they know all the real data. We have huge time constraints and pressure - it's not like a slow enrolment for other events. It's usually being filled out as clock is ticking down. It's all automated and it shuts down to prevent people entering info after 7pm deadline etc. We have no time as we then go into the heats etc - So we can get some further data upfront at registration but that is usually just the producer or team leader's data as at that stage they don't know their full team's details. So it's all a bit tricky tbh.

Thinking about my experiences of 48 Hours, I know that some team members have downtimes over those hours and if it became necessary to supply demographic info, I believe there'd always be someone in the team who could do it.

Anyway, at the end of our exchange on Facebook (tried to embed whole post but for some reason I can't), Ant wrote–

I think we can improve our data grab at the head of the comp to get deeper intel on gender for writer/ producers...will talk to web whiz Matthew Buchanan about doing this...we can't even get most teams to upload their shorts to the screening room after the finals. I wish it was as easy as it all sounds. We'll try tho.

9 And, finally, a Couple of Good Reads. “What’s Not to Touch: Jane Campion’s Intimacies”, by Jaime Chu, in Cleo: A Journal of Film & Feminism. Made me think.

And then, in e-tangata, a lovely interview with Miriama McDowell, winner of Best Actress at the New Zealand Film Awards, for her role in Andrea Bosshard and Shane Loader’s The Great Maiden’s Blush, winner of the Best Self-Funded Film. The interview includes this beautiful photograph.

Coming soon! An interview with the amazing women of Moms-in-Film about their #BudgetTheBaby initiatives!