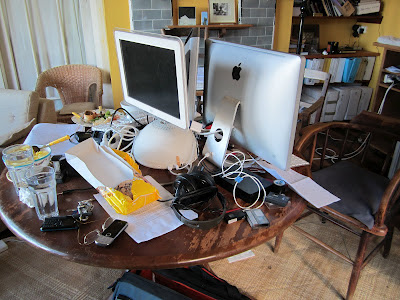 We get Crime at 48 Hours. (Whew. We could have got Inspirational...) Deep gratitude for protagonist and other preparation, generous gift of remarkable poem. *And* we don't need to make blood.

Input from three others on core team, in person and on Skype. First draft to them around 10.30 pm. Rewrite done by 2.20 am, via email, phone, and in person with core team neighbour. Sleep interrupted by new lines of dialogue and small structural change.

All to Radio Access Wellington in the morning. The delights of a familiar, warm, and well-serviced indoor single location, fantastic crew, wonderful cast. Hang purple-painted canvas.

Steady schedule to around 1.45 am. Final image: a sterling crew member vaccuuming the studio.

Core team home. Listen to music files from fourth core team member, who's been working hard at home up the coast. Import, watch and annotate two hours and eight minutes of tapes. Regrets that we have too much footage to be sure that we'll always select best options.

Inhale stew etc around 5 am. Neighbour off home 6-ish for nap. I have a bath-and-sleep (from hot to lukewarm water). Dogged editor–who had gruelling day in other roles–continues.

I walk around waterfront to outdoor Sunday market, to get supplies. Cook omlets and have discussion. A low point. We may not get it done. Dogged editor calculates that his current functionality fluctuates between 5 and 50% of normal. Energising return third core team member.

Delivery time: 6.20pm. A new Bechdel Test film reaches the world. Quiet joy. Much love for everyone who contributed.

Now. Find out who owns the beautiful bag in the kitchen. Finish cleaning the kitchen. (Big thank you to whoever did the dishes!) Dismantle the blood-making tray.

PS A week later. Very happy to have had the opportunity to experiment with lovely people who know what they're doing. To have written my first short script. To have written a script that others contributed to. To have finished a script that I'd never have begun if left to myself at my worktable. To have helped make a wee film in a location that I'm using for another script. To have learned more about sound. To have seen the outcome on the big screen. *And* to know for sure that a page of script does not necessarily equate to a minute of screen-time.