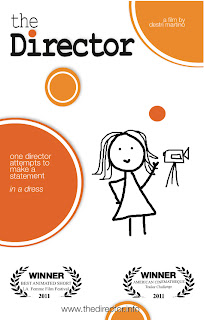 It's the first day of the Cannes Film Festival 2012 and I'm thrilled that New Zealand film reviewer Sarah Watt is there and blogging. So is Destri Martino, whose short film The Director is screening in the Emerging Directors programme at the American pavilion and in the Short Film Corner. Destri's UNGLAM CANNES blog is wonderful, totally endearing for any woman who makes films and would like to go to Cannes, a real insiders guide.

There are no women in competition for the Palme d'Or this year again, after a better year last year, and the protests are rising. From French women, for the first time that I'm aware of, and two of the authors, Virginie Despentes and Coline Serreau are directors, another lovely example of European women directors' activism to add to what I know of the Spanish women directors at CIMA. (The third author, Fanny Cottençon, is a comedienne).* As in Spain, these courageous directors can also depend on support from feminists who aren't filmmakers: we can sign a petition here, organised by the French feminist group La Barbe (The Beard). Melissa Silverstein from Women & Hollywood has also organised a petition, continuing the good work initiated by Ruth Torjussen's You CANNES Not Be Serious campaign in 2010. I've signed both petitions with enthusiasm.

In a response to the French article, Thierry Fremaux, the Cannes Festival CEO, stated that it isn't just Cannes in May that's the problem, the problem exists all year. I'd add to his statement, that the problem exists everywhere all year: it's not just Cannes and France. (But this doesn't let Cannes off the hook. Nor Thierry Fremaux.) This week too, Ms magazine has a new article about Hollywood's 'war on women', following the latest research from the indefatigable Martha Lauzen. And because the problems are global, systemic and year round, is it possible that Cannes-oriented protests won't be effective? What other strategies might work? Here are some suggestions.


It's up to bold filmmakers who are part of the boys' club -- Cronenberg, Daniels, and Anderson among them -- to squawk about the inequity. We love them; now it's time for them to return the love.

I think it's a great idea to form alliances with male filmmakers and decision-makers who will speak up on our behalf whenever and wherever that might help. Thelma's right. We need them.

Complementary strategy 2 - watch only films that women direct
I wonder what would happen if enough of us said "I'm going to watch only films that women make", a modern version of Lysistrata, the ancient Greek comedy: Lysistrata persuaded Greek women to withhold sexual privileges from their husbands and lovers as a means of forcing the men to negotiate peace. Is it possible to use a similarly withholding strategy as a way to facilitate change? Could we persuade decision-makers to invest in women-directed films by refusing to participate in the economy that primarily supports male filmmakers and stories about men? The other day I went to a male-directed film that had a weakly written and poorly realised woman protagonist and included rape jokes, which amused both men and women in the audience. And I thought (not for the first time) "I've had enough. Even if I don't enjoy some women's films, for artistic or thematic reasons, I'm going to watch only women's films for a year". But are there enough women-directed films out there? I think so. Cannes is one place to look, as well as women's film festivals and film websites and the fascinating and diverse range of Indiegogo and Kickstarter campaigns. And where there are gaps and I wish there were more women-directed movies I might donate to an Indiegogo/Kickstarter campaign that promises a woman-directed film I'll enjoy. No more excuses.

Complementary strategy 3 - ask for service that focuses on women filmmakers
This week on Twitter, the St John's Newfoundland Women's Film Festival (@SJIWFF), which is blogging about women-directed films available on Netflix, asked Netflix to add a 'female-directed' category. I shared a brief discussion about aspects of this, including 'ghettoization', with them and with Tasmania's filmmaker and women's fest director Briony Kidd (@BrionyKidd). According to @SJIWFF, Netflix "wasn't very receptive", but "but perhaps if enough of us asked @Netflix to do it, they would"?
Complementary strategy 4 - name women filmmakers as often as possible
I'm also training myself to seek out and to name women filmmakers around the globe, to familiarise myself with their work, whether it's shown at women's film festivals or in other contexts. And I hope that if I keep naming women directors and their films in this blog and on the Development Facebook page, (and  Kyna Morgan at HerFilm and all the other women film bloggers do the same), more and more people will look for women-directed work and start to talk about it.

There's a market associated with the Cannes Festival, and in this year's list of 1383 market showings the numbers of women's films are low (some of the films are also in the festival and there are docos and animations as well as fictional features, some have several showings). Today for instance, of the eighty-two for which I can establish the director's gender, there are eleven made by women. 13.5%! Those producers/distributors aren't prioritising women-directed films! I'm familiar with Chilean Marialy Rivas (Young & Wild/Joven y Alocada) and with two women from the USA, Aurora Guerrero (Mosquita y Mari) and So Yong Kim (For Ellen). But not with Margaret Whitton (A Bird of the Air) or Alison Bagnall (The Dish and the Spoon) from the USA. I haven't heard of two women from Spain, either: Paula Ortiz (Crysalis/ De Tu Ventanaa La Mia) and Sandra Sanchez (Behind the Lights/ Tras Las Lucas). And what about Alice Schmid from Switzerland (The Children from Mount Napf/ Die Kinder vom Napf)? Yolande Zauberman's Would You Have Sex With an Arab and Marion Lane's A Monkey on My Shoulder made in France? North Korean Japanese filmmaker Yonghi Yang's Our Homeland interests me too.

Screening on other days, of names that I know, New Zealander Miro Bilbrough's long-awaited Being Venice (sometimes with other titles) will screen and German filmmaker Doris Dorrie's new work, Bliss. If more of us committed ourselves to viewing only–or even mostly–women's films, would all these screenings be packed with potential buyers? I like to think so.


Complementary strategy 5: provide gender breakdowns of all the categories at Cannes and other festivals
This is necessary both to name women directors and films to watch out for and to acknowledge that some selectors have included women, sometimes in greater numbers than expected.

First, the Cannes Short Film selections. Three out of the ten short films in competition are made by women. Zia Mandviwalla from New Zealand is there with Night Shift (no trailer available).

In Un Certain Regard, the 'new talent' section, women wrote and directed three of the seventeen films. France's Catherine Corsini's Three Worlds is about a young man whose world is turned upside down after an accident on his stag night.
Sylvie Verheyde's period drama Confession of a Child of the Century stars Charlotte Gainsbourg opposite the rocker Pete Doherty.
And Aida Begic from Bosnia wrote and directed Djeca (Children of Sarajevo), about two war orphans.
I'm going to keep an eye out for all these films. And it helps me to have these images of the makers; it makes them feel more real.

There are other Cannes selections too, including Cinefondation selected from work made at film schools round the world, where there seem to be some women, but I need to check more names, always time-consuming in international lists. Special Screenings where there are a couple of women. Out of Competition, where there are no women.

I'm delighted to know of all these women's films at Cannes and its market because now I can look for them to fill my women-only viewing year! Want to join in? Please let me know if you see any of them and want to recommend?

*The Sydney Morning Herald reported the story here, but missed Children of Sarajevo. 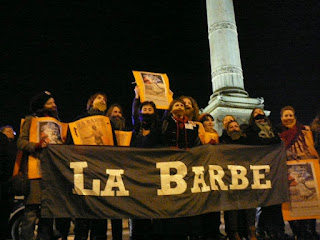 PS Hilarious (& heartbreaking) take on the issues from Berenice Bejo, this year's Mistress of Ceremonies at Cannes. She thinks that directing is a bit like nursing: more appropriate for one gender than the other! Tx @annesobru ("u just Want to shoot her [Berenice]. Or maybe yourself") and @coxygrue.

MORE LINKS
Sharp analysis from Didion at Feminéma
Thelma Adams is always good, and this is her latest (21 May)
Distinguished Spanish director Icíar Bollaín's early statement on women directors and Cannes 2012.

So far, I find this view the most persuasive, from director CampbellX, at BlackmanVision on Facebook, in response to a Guardian interview with Trudie Styler and Lucy Walker: "I don't really think women at the top is gonna change anything. What has to change is the types of films we value and that is not gonna change anytime soon." I read her 'we' as all of us who watch movies–audiences–few of whose members are producers or other kinds of gatekeepers.