After the news of your promotion came, and the news that you are now also Minister for Women (and Minister of various other things), it was good to hear you say that you’re a feminist, most of the time. And to read that you said ‘I hope there are some young Māori women out there watching the news tonight who say, 'in a few years that is going to be me'
Does that mean you're familiar with Geena Davis' mantra, amplified through her Geena Davis Institute on Gender in Media– 'If She Can See It She Can Be It'? Does it mean you're familiar with director (Selma, Queen Sugar, 13th etc) Ava DuVernay's
'Why is it important for girls and women to see themselves on screen? ...Film is a mirror. If you don’t see yourself, does it mean you don’t exist?'

And I remember a couple of years ago listening to you at the Beehive, when you launched the Jade Speaks Up project including a short animation I scripted. You highlighted the importance of stories and images, recognised that those presented in Jade may help to enhance children's resilience.

So I think you're probably aware of and understand the reasons for the global movement to increase the numbers of feature films and fictional television programmes that are both written and directed by women (in all our diversity) and about women and girls (in all our diversity). I imagine that you mightn't have been happy to learn from academic Martha Lauzen that when men direct feature films, only 4% have women or girls as protagonists, in contrast to 39% if women direct. Or to learn from Amber Thomas that women spoke only 27% of the words in 2016's biggest movies.

And I imagine that you're also aware of and understand the reasons for story sovereignty, why it's important that, if we've been under-represented and misrepresented, we tell our own stories and get them to wide audiences. As Ava DuVernay puts it–

...there's a special value in work that is a reflection of oneself as opposed to interpretation. When I see a film or a TV show about black people not written by someone who's black, it's an interpretation of that life.
You may know, too, that research has established that in the US' although female filmmakers systematically face fewer resources and opportunities than their male counterparts, their movies tend to reap a greater return on investment' that when women direct, more women are employed in the crew (see here); and that films about women and girls have huge audiences (though recent successesHidden Figures– doing better than the latest Star Wars instalment at the box office in the US – and Moana were made with men directors and just one woman co-writer in each writing team).

I don't know whether you've been involved in discussions about the recent gender equity policies at the NZFC and have celebrated the progress there with local projects (see Part 1), but I imagine that you welcome opportunities for New Zealand taxpayers to be involved in making change, because it makes sense to you that women are employed behind the camera and that more stories feature complex, diverse, interesting, women and girls as well as women's interpretation of men.

So, my suggestion is, how about if you make New Zealand a global leader, the go-to country for big-budget and smaller budget productions, including co-productions, that women write and direct, often about women and girls? Why not ask Treasury to gender-tag the New Zealand Screen Production Grant (NZSPG) investment, so that half of it goes to women-written and women-directed films (and television)?

Maybe you're already involved in making this kind of change? For instance, in this financial year, part of Disney's A Wrinkle in Time, directed by Ava DuVernay, screenplay by Jennifer Lee, from the novel by Madeline L'Engle, is about to be shot down in the South Island. You may know that this is the first time ever that an African American woman has helmed a live-action feature with a budget over $100 million? Only two other women ever have directed live-action films with a budget in this range.(And as Minister of Tourism, you may be considering the project's long-term impact on tourism?) 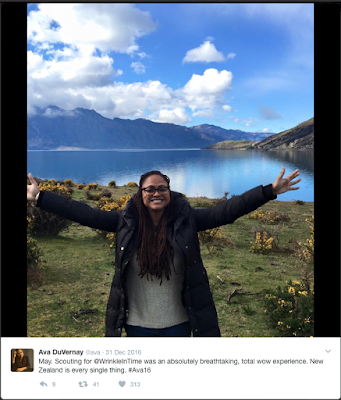 But in case you aren't involved, here's a wee pie chart to show the New Zealand taxpayer's investment in feature films in the 2015-2016 year, a total of $66.1m, through the NZFC and the NZSPG.

That blue 19% refers to the $12.7M the NZFC invested in local features during 2015-2016, where gender equity was achieved in relation to writers and directors (see Part 1 for details)

The gender proportions of the writers and directors associated with the big yellow field is shown in the next pie chart, representing the international features that received 69% of the investment: 45.65M.

This investment was spread over nine productions, with twenty writers and nine directors. The red 7% represents just two women among the twenty writers. All the directors were men. And although The Hunger Games: Mockingjay 2 and The Light Between Oceans featured women, the other five projects were about, as well as by, men.

The green field in the top pie chart represents the five local and co-produced projects that received $7.7M, or 12% of the NZSPG investment; some of the local productions also received NZFC funding, not necessarily in the 2015-2016 year. The writer and director gender balance was better than in the last category, as this pie chart shows. But not as good as in the taxpayer funding in local feature films, via the NZFC and represented by the blue field in the top pie chart.


These films also had some female elements – in Mahana and Born To Dancefor instance – and Atomic Falafel had female protagonists: more men are making films with female protagonists since the market for these films was confirmed. But only one production,25 April, had a woman director, New Zealand's Leanne Pooley.

One authoritative writer, Scott Mendelson speculated that A Wrinkle in Time will be a game changer. Writing in Forbesabout 'a special effects and spectacle-filled fantasy that just happens to star a cast headlined by a young black actress and surrounded by people who aren’t almost entirely made up of white guys', he said–
'It could be the big hit that offers substantial evidence that you don’t have to have a male lead to score big box office around the world. You don’t have to have mostly white characters to be a big blockbuster. And female filmmakers, even non-white female filmmakers, are just as capable of making a studio-backed big budget fantasy adventure as the white guys who get the keys to the franchise kingdom after one well-liked indie breakout.'

Here in Aotearoa New Zealand, we could be part of this change?

How about making sure that New Zealand takes a visionary role in the global entertainment community and that we are strongly positioned to take full advantage of this game change?

With every good wish, Marian

And here are some of the A Wrinkle in Time cast, with Storm Reid at far right, who will play Meg Murry. They're almost here.

(And you recently responded to a tweet from Reese Witherspoon, one of the stars in this image, so I'm feeling optimistic that you're onto it all.)