The report shows the gender and ethnicity make up of ‘above-the-line’ roles in screen productions that the agency funds.

Here's the full report, which covers the 2014/15 and 2015/16 years, for projects completed by April 2016. And here's its infographic, summarising the report's findings. 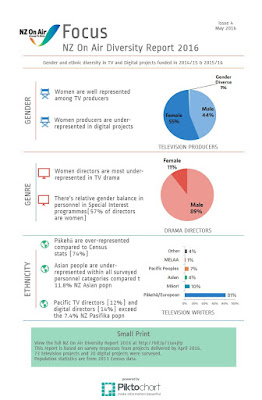 This will be an annual report. This one shows–

Women are most under-represented in drama, where they make up just 11% of all directors. (This is a really important bit of data, at last!)

Pākehā are over-represented in all roles, compared to general population statistics.

13% of television directors identify as Māori (a little under the census figure of 14.9%). (I wonder how many of these are women, given that we haven't had a feature film directed by a Māori woman since 1988 and one reason sometimes given for this is that Māori women prefer to work in television.)

1% of television producers identify as Asian compared to 11.8% of the population at the last census. (I wonder how many of these are women.)

12 % of directors identify as Pasifika, exceeding the national population figure of 7.4%. (I wonder how many of these are women.)

Trends are similar in digital media production, although there was a higher representation of Pacific people among directors at 14%, and writers/researchers at 17%.


“This is the first time we have gathered this information and it will now become an annual series so that we can monitor progress. There is clearly a challenge here which needs discussion,” said NZ On Air Chief Executive Jane Wrightson in a press release.

NZ On Air-funded content is less than 15% of total television production, but NZ On Air does not expect data from commercially funded content to be any better. “While we encourage the industry to take the lead in helping redress the gender and ethnicity imbalances, we will also be considering what levers we have as a funding agency,” Ms Wrightson said. “From a story-telling perspective it’s important that TV and digital media production personnel are more reflective of the general population make-up.”

Yes! This level of transparency can only be a good thing. I'll be reading the report soon to see if my immediate questions are answered. And if there are other questions that the report raises.

NB: This report is covered more fully here, where I address some questions alongside other equity issues in NZ.