November 08, 2015
A great week last week, thanks to the male allies of #womeninfilm. Paul Feig tweeted several times in support of Destri Martino's fine work at The Director List, where she's created an elegant database of over 1000 accomplished women directors from around the world (more coming all the time!) and, each Friday, provides us with info about the latest crowdfunding for projects with women directors. This kind of very useful tweet –

Help @DestriMartino continue her important work by going to https://t.co/8LzP2NhdQH & clicking the Donate button at the bottom of the page.
— Paul Feig (@paulfeig) November 3, 2015

And in New Zealand, writer/directors Jemaine Clement and Jonathan King and actor Ben Fransham tweeted in support of gender equity in allocation of the New Zealand Film Commission's funding (scroll down here for more details, I was very excited).

And another great week this week. Warmed by all this extra support and info, we can contribute to the #FavWomanFilmmaker campaign,  from Agnès Films, a United States-based collective that supports women filmmakers, in all roles.

The #FavWomanFilmmaker hashtag will be on Twitter for four days (Monday November 9 – Thursday November 12), for us to tweet our favorite woman filmmakers and the reasons why we love them.

Agnès Films, named in honor of Agnès Varda, the French filmmaker who has been making women-centered fiction films and documentaries for over 50 years, hopes 'to bring awareness of the transcendent work being done by women behind the camera and to invite people to check it out and share it with others' and will be twinterviewing many people with intimate knowledge of the issues, like Women & Hollywood's Melissa Silverstein,  writer/director Hope Dickson Leach who's just finished shooting her first feature, The Levelling, and is part of Raising Films ('making babies, making films, making change') and Sophie Mayer (also part of Raising Films) whose Political Animals: The New Feminist Cinema has just been published. 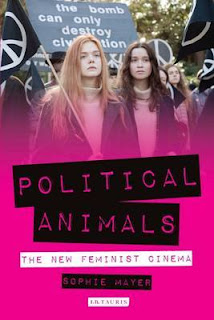 Calendar All times are EST. For some of us in other timezones, we may need to keep checking a converter.

Not sure about your faves? Looking for more?

Ms in the Biz's #HireAMs database– from Acting Coach (on set) and Art Directors to Production Managers to Writers/Script Doctors.


Maria Judice's ReWrite Hollywood tumblr where she posts a feature script written by a woman each week. Am soooo grateful to her.

Cinema Fanatic's compelling A Year With Women, where every movie she watches in 2015 (at home or in theaters) is written by, directed by, co-written by or co-directed by women. Her idea's been picked up by–

Women in Film Los Angeles, where we can pledge to watch 52 films by women over a year.

Check out the #DirectedByWomen's thorough lists, too.

& let me know if you have an additional list, from anywhere in the world?

There will be videos each day of the #FavWomanFilmmaker campaign. Here's the first one. I like it!