What amazing news from Australia, via Screen NSW (Screen New South Wales, based in Sydney) and Film Victoria (based in Melbourne)!

Screen NSW  has just introduced a gender equity target, of 50/50 allocation of its development and production funding programs by 2020 and will work towards reducing the industry wide gender bias against women in key creative roles.

These are the latest Screen NSW funding figures, according to Danielle McGrane of the Sydney Morning Herald–


Just 28 per cent of directors and 16 per cent of writers working on features funded by Screen NSW from 2012-2015 were female. There were more female producers at 75 per cent.

For those of you outside Australasia, New South Wales is within the film funding territory also covered by the nationally-oriented Screen Australia, which has no gender policy. These are Screen Australia's figures, according to Danielle–


Just 15 per cent of directors for Screen Australia-funded features from 2009-2014 were women, while 32 per cent of producers were female.


This is an equity issue – of course it is – but for Screen NSW, it’s principally about supporting and enabling the very best work. And if females are so poorly represented, it means that we, as an industry, aren't exploiting all we have to offer. The long game of this target is, for us, about leveling the playing field to ensure that women get the same opportunities as men and that the strongest work gets supported. And it can't be achieved unless we just decide that we're going to do something about it.

I'm curious. Courtney Gibson started work on Monday 16 November. The gender equity target was announced the very same day. So who was responsible for creating the new policy? I'd love to know. Warm congratulations to whoever organised this.


Film Victoria has committed $50k to a new partnership with the Natalie Miller Fellowship, to fund five Victorian women to help advance their careers and take on leadership roles within the screen industry.

Natalie Miller AO is a visionary leader in the Australian screen industry, a passionate supporter of independent films and filmmakers, who brought quality art house cinema to Australia through her leadership at the Longford Cinema, as co-founder of Cinema Nova, one of Australia’s greatest independent cinemas, and as Executive Director of Sharmill Films, the only distribution company in Australia established and run by a woman. She's just won the Screen Producers Australia Lifetime Achievement Award.

The Natalie Miller Fellowship was created in 2011 to recognise and nurture the next generation of female leaders in the Australian screen community and inspire them to achieve outstanding success at the most senior levels of the business and it's a delight to see the fellowship's partnership with Film Victoria.

This is what producer Sue Maslin (The Dressmaker) has to say about this new venture, as President of the Natalie Miller Fellowship–


By encouraging more women to take on positions of leadership – roles that allow them to make a real difference – we not only address the gender imbalance that’s still evident at the top, we drive better company performances and greater innovation. And that means a more dynamic, diverse and robust screen industry for everyone.

And Jenni Tosi, CEO of Film Victoria, says this–


It’s important that those of us in positions of influence take action to identify where and how we can assist women to progress to leadership roles within the screen industry.
This initiative provides an opportunity for Victorian women to enhance their careers, expand their skills and ultimately go on to be actively be involved in positions of leadership and influence, which will make our industry better and stronger in the long term.

As I wrote earlier this year, Australian film activists have been going for it lately, joining their veteran activists who've been at it for years. And it's very very exciting that the hard work is paying off. And guess what? I've seen no negative response at all. 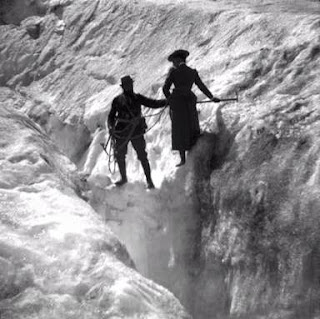 Anita's back from the Stowe Story Labs where she worked on her feature script Cloud Piercer, about climber Freda Faur, the first woman to climb Aoraki/Mt Cook, New Zealand's highest mountain, back in 1910. Here's her brief report–


Stowe was quite incredible! To be amongst a group of such diverse writers for a brief but intense period of learning, storytelling and community building was invaluable and invigorating.

I'm incredibly grateful to my fellow Labbers and know that I have made friendships for life. Equally, to work with and learn from tried and tested, seasoned and acclaimed mentors ranging from writers and producers to casting directors and editors was humbling and inspiring. The generosity, in terms of time, patience, open ears and insight of these lovely bunch of humans made the trip and the hard work to get there absolutely worth it!

I came home with a new appreciation for screenwriting and armed with a notebook full of ideas, questions, and to do lists. From that, I've gone through two rewrites for Cloud Piercer, looking at theme and character arcs respectively. I'm happy with the script as is (or as happy as you can get before your creative self-consciousness kicks back in again and tells you differently).

Now the big question is, where to next? Not an easy one to crack for an unknown writer... Nothing for it but through, be brave and take risks, and to hopefully find producers who believe in the story and how I am telling it, and are willing to bet on Freda and me. In the meantime, I'm working on a short film I would like to direct.

It makes me very happy to be part of this wonderful, ever-growing collective of female film-makers. It feels like home.

Shooting Women: Behind the Camera Around the World
Early next week, WIFT NZ will celebrate this internationally significant book, co-written by WIFT member and Wellingtonian Harriet Margolis, with Americans Alexis Krasilovsky and Julia Stein– 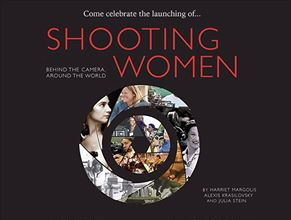 The launch will be followed by part three of WIFT's gender discussions, as a bonus– 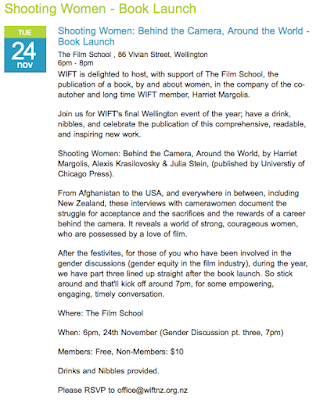 This is what Harriet told me this week–


[One local camerawoman] says she’s now less worried that after she’s gone the work she’s done will be lost and forgotten. That’s why I stuck with this project. I come from that early tradition of feminist film studies that adopted Women’s Studies’ discussion of the difficulties of researching lost history and the need to break that cycle. And early in my career I researched through the pages of trade publications looking for proof that networking could help women move forward in previously blocked career paths. I’m less sanguine about that at this point, but at least feminist historians can claim some progress.


This is a programme of recently digital restorations of Joanna's films shot in the 1970s and early 1980s. Several were recently premiered by CIRCUIT at the 2015 London Film Festival. Often shot and edited in camera, Joanna's films chronicled motherhood and domestic life, the worn traces of urban settlement and the the natural world.The programme's curated by Peter Todd and commissioned by CIRCUIT Artist Film and Video Aotearoa New Zealand with the support of Creative New Zealand and the estate of Joanna Margaret Paul.

Pre-sales only - $15 from Under the Radar. There will be a fully functioning bar on site. And music from Groeni! (And I hope the films include what Sophie Mayer describes as 'The tender, funny Sisterhood (1975) ... shot at a radical separatist women’s house with artist Allie Eagle'!)

There's an associated podcast from London, 'Writing Women's Experimental Film Histories’, a panel discussion, recorded at the London Film Festival before a recent screening of Joanna Margaret Paul: I Am An Open Window. And Sophie Mayer’s Sight & Sound review of the Writing Women’s Experimental Film series that included Joanna’s work is here.

Later in the week–

We may not be able to see Joanna's Sisterhood this weekend. But, forty years later, we can soon enjoy Pot Luck, New Zealand's first lesbian webseries, written and directed by Ness Simons and directed by industry veteran Robin Murphy. With one episode already shot, thanks to the Wellington-based Emerging Artists Trust (EAT), Pot Luck–

It's crowdfunding right now. And one of the actors is Nikki Si'ulepa, herself a writer/producer/director, one of those gloriously multi-creative women the Pacific produces so many of, so well.

And, this weekend in Welly (and till 2 December) there's Show Me Shorts, New Zealand's only Academy Award ® accredited festival, with its Best Film winner eligible for an Oscar. It's in its tenth edition, with a great programme that gets better every year (1000 entries this year!): check it out here.

Show Me Shorts always has a wonderful launch and Thursday night at the Paramount was no different.

Cupcakes. With images from the selected films on delicious icing. 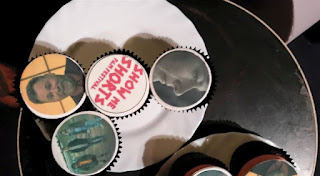 Including one of Tina Cleary, winner of StarNow Best Actor for her fine performance in Cub. (List of all award winners here.)

Lovely acknowledgements from outstanding festival founder and director Gina Dellabarca (I hope she'll direct the New Zealand International Film Festival before too long, if she wants to).

Welly producer Mhairead Connor received the NZFC Special Jury Prize for her work as producer of UFO, described as–


A fine night. And a huge treat for Wellingtonians right now. (If you're not a Welly person, it's probably coming soon to somewhere near you – 22 venues, right around the country!) 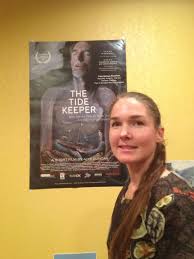 
The Tide Keeper is concise, intelligent, beautiful and moving. This film created another world within a world, incorporating an intriguing sense of choreographic movement and the best elements of story-telling and cinema. It is totally original.

I agree. Alyx's portrayal of the time keeper's body especially touched me. His movements under constraint. His feet.

This isn't the first award for The Tide Keeper. Among others, it's won the NZIFF Best Short Film and the Fipresci Award at Vladivostok.

And Alyx herself has just won SPADA's New Filmmaker of the Year. SPADA notes that Alyx has been part of the Berlinale Talent Labs Doc-Lab, had a six-month mentorship with Rolf de Heer as part of Script to Screen’s FilmUp Programme and has just finished an NZFC director’s internship with Alison Maclean on The Rehearsal.

Alyx's second feature, Lonely Girl, following The Red House (2013) is a co-production between Australia and New Zealand shooting mid-2016. Lonely Girl is a psychological thriller about an isolated young woman who accidentally runs down and badly hurts a suspected killer, produced by Sam Jennings of Causeway Films (The Babadook). Her screenplay for The Surrogate (written with writer and filmmaker Lani-rain Feltham) has been shortlisted for Sundance Writers Lab.