Gaylene Preston on Her Earthquake Experiences 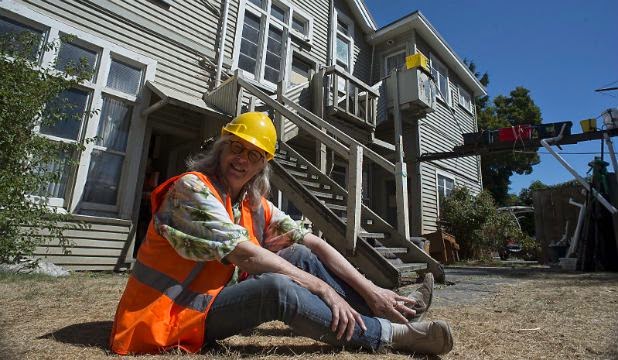 In an hour the first of three ninety-minute episodes of Gaylene Preston's Hope and Wire will debut on New Zealand television.

When I saw half of tonight's episode, a while back, I liked how it seemed to bring ALL of Gaylene's skills and experience together in one space in an interesting example of media convergence. Gaylene as a veteran writer/director/producer. Gaylene as doco maker and oral historian. Gaylene as creator of screen fiction. (And Gaylene as enthusiastic community member. As highly politicised community member.)

If you're not familiar with her work, think of Gaylene as a kind of New Zealand Charles Dickens (Oliver Twist, Bleak House, Hard Times). Or Alison Bechdel (Dykes To Watch Out For, Fun Home, Are You My Mother?). Or our very own Callie Khouri (Thelma & Louise, Nashville). I think Hope and Wire may be the work she will be most remembered for. 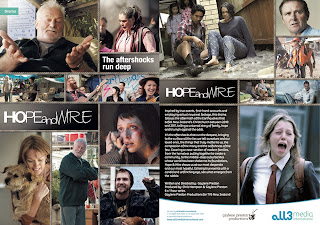 The run-up to the screening has been quite a trip for Gaylene; she's needed her hard hat. I've been collecting the press articles here and am delighted to reprint one of them, Gaylene's personal earthquakes story. And I think my mate will like it too. The one who used to live in Christchurch. The one who just texted me about wanting and not wanting to watch Hope and Wire. Thanks, GP!


I don't think people outside Canterbury realise how frightening and destructive that first earthquake was on September 4, 2010 at 4.35am. Subsequent events eclipsed the memory but those who lived through it have seldom forgotten.

I remember a tiny tremor - enough to wake me up. We get them a lot in Wellington. Occasional reassuring jolts that make us feel like the faultline is moving as it should. I rolled over, pleased that the recent renovations of my mouldering villa had anchored the old girl to its foundations.

It was, to me, completely inconceivable that the tremor was hundreds of kilometres away under Darfield and that Christchurch had suffered a nasty 7.3 (later down-graded to a 7.1). Unbelievable.

I was a fine arts student in 1968, living in Fendalton, when the Inangahua earthquake rolled in. And that's what it did – it rolled – unlike the jolting bucking and aggressive quakes we experienced in Hawkes Bay in the sixties when I was going to high school there.

Now those earthquakes were to be reckoned with. The building would groan and bang and snap, before, with luck, the quake was gone leaving everyone terrified under their desks as alarms rang – was it coming back?

In Christchurch in 1968, in my bed in the flat in the big old house in Holmwood Road, I didn't get up – unlike the Colombo Plan students next door who refused to sleep inside for the rest of the week. In my young mind, I decided (in the way people can when they are 19, with total certainty) that the Canterbury Plains would always soften quakes coming to Christchurch from the Alpine Fault. How wrong can you be.

I rang my Southern friends that morning of September 4, 2010. Characteristically, all were stoic in the face of trauma.

"No, we're lucky. We've been up on the roof pulling down the chimney. Barbecue for breakfast, cooking what has defrosted in the freezer – whitebait – with the neighbours. Pity it took an earthquake."

Then the 'quake runners' started arriving. That's the name they give themselves. In our case, young parents with kids, freaked out, fear in their eyes, getting as far away from the unpredictable shakes as possible.

"We just threw the kids in the car and took off."

Over the next few months, while the aftershocks took their toll, with the passing of time, as the 'Christchurch refugees' settled elsewhere and our spare rooms emptied, the rest of the country gave and moved on. The prevailing story from the South was that Christchurch was the lucky city. Then came the big one.

That day, February 22, I put the phone down from a conversation with an old friend and collaborator. Graeme Tetley had just arrived in a little cottage on the hill in Lyttelton and was looking forward to a year living there while being the official writer in residence at our alma mater, Canterbury University. I didn't know what had happened until I tuned in for the news at four.

Then, from the television, the unthinkable images seared our minds.

I sent him a text. I didn't want to say, "Are you all right?", so I just quoted an old song we had just been talking about. It was sung at my parents' wedding and features in two films I made, War Stories Our Mothers Never Told Us and Home By Christmas. "I'll Walk Beside You", I wrote.

Then I waited and waited. It took eight long hours to hear from Graeme. "Im OK". No punctuation. No xx. Uncharacteristic. He rang me the next day, raving. He was heading for Picton – not in panic and fear but on an adrenalin high. You can feel invincible after a near-death experience. Absolutely unassailable.

"If you want to know where the epicentre of that earthquake was, it was right underneath my pink bum."

We two had discussed earthquakes occasionally, both of us having grown up in Hawkes Bay and been the beneficiaries of the socially reconstructed community there. I arrived from Greymouth when I was 10, and couldn't believe the contrast from that little colonial coastal town of wooden houses, lamp-posts and telegraph wires to glistening art deco ferro-concrete Napier where the electric wires had been buried underneath the broadened main street after a devastating earthquake in 1931.

I gradually found out that almost everything in Napier was "because of the earthquake". It had wrecked the town that burnt to the ground within hours of the main jolt. Thankfully for us now, in the wake of events in Christchurch, February 3, 1931 remains the date of this most lethal earthquake in our country's history – 256 souls perished. A terrible statistic that sits in the fearful part of a young brain.

But by the time I was a teenager there, the community had jelled in an unusual way. Those sweating men in their shirtsleeves running the community sings at the Soundshell in the 1960s were the same men who in their middle years had led the community in the aftermath, knitting the frayed social fabric together in a time of enormous want during the major global Depression.

I heard plenty of earthquake stories from the elderly and learnt that the simple personal stories of common experience were the most revealing.

"A man came around collecting blankets. I gave him my best ones, but he never returned them." Still annoyed after 30 years.

Graeme researched earthquakes too. He was commissioned to write a telefeature that presented what was likely to happen in Wellington after "the big one" hit. After his experience in Lyttelton, he told me that no matter how much you think you know about earthquakes, when it actually happens, you know nothing.

It's unfathomable. You are literally terrified out of your wits.

A few weeks later, the night another "big one" hit off the Japanese coast, after watching the dreadful tsunami wave devouring everything in its path, Graeme turned off his television and was dead within hours.

That's a statistic. After experiencing a big event, where the earth turns to waves and boulders leap out of the ground, they bring out the defibrillators. Evidently there's a 50 per cent rise in the mortality rate from heart attacks up to six months after a terrifying set of quakes. Statistics are just that.

But a life is a life and my friend, like many others, is sadly missed daily.

It has been said that all films are a letter to a friend. It is the task of storytellers to translate human experience. Hope and Wire is about what happens when the ground beneath our feet moves (literally) and the social crucible cracks, letting the light shine into dark corners illuminating tragedy, triumph, humour and all that makes us human.

It is a drama of small things, of common experience, and resilience and grief. And as for Graeme - well, I still walk beside him.

Footnote: Three years after February 3, 1931, Napier celebrated a completely rebuilt main street and city centre with a parade and what would now be called a street party.

From TV3–
If you, your family or friends have been affected by the issues raised in this programme, call the Canterbury Support Line to be connected to free and confidential services.

The support line can help with your questions, give information, connect you with free counselling services or organisations that can offer you practical support, information or advice.
Call 0800 777 846, 7 days a week, 9am to 11pm.

PS My post from way back, about the first quake + + includes reference to a brilliant earthquake post by Christchurch woman Lara Strongman. And then I found this review she broadcast re Hope and Wire, a great listen–