September 16, 2012
In Europe, it's a roller coaster year for women filmmakers. There were no women-directed features in competition at Cannes earlier in the year, but recently lots of women's films in every programme at Venice. And two announcements last week further illustrate the unpredictability of European responses to women-directed features. The state-funded Swedish Film Institute (SFI) announced its latest feature film funding decisions and four of the seven films have women directors. That's 57%, and maybe a world record? But in the second announcement, of forty-seven feature films recommended for a nomination in the  European Film Awards 2012, women's representation is very low: they directed only four, a tiny 8.5%. According to the awards website, "with 31 countries represented, from A(ustria) to U(nited Kingdom), the list once again illustrates the great diversity in European cinema." Can it do that, with so few women-directed films represented?  Is this minimal selection of women's work some kind of record too?

Swedish Film Institute Funding
The Swedish figures are not a huge surprise. The Swedish government has invested heavily in increasing gender equality in culture, including film. Its strong statement published in June says:


Efforts to achieve gender equality must continue and have an impact on every area of cultural policy. As in society as a whole, the cultural area must be characterised by equal treatment and equal terms for men and women. All agencies in the area of culture must incorporate a gender equality perspective in their activities, which is stated in the agencies´ instructions.

The film sector had already received SEK 1.1 million in special support to strengthen gender equality in 2010-2011, and now the SFI will receive part of SEK 17.5 million during the period 2011-2014, to improve conditions for women film-makers. (The rest of the money will develop new methods for gender equality in museum exhibitions and collections, and fund special projects in the area of music.)

The SFI has a formal goal to have 40% from each gender in key production roles and keeps a close watch on the statistics. Here are some key SFI stats from 2001-2010, showing that women producers, as elsewhere in the world, are quite well represented, but not writers and directors. The figures in the respective categories apply to all Swedish films which have been screened in cinemas in Sweden. Each diagram comprises three graphs which show: all films premiered, films premiered with Film Commissioner funding from the SFI, and films premiered without Film Commissioner funding from the SFI.* 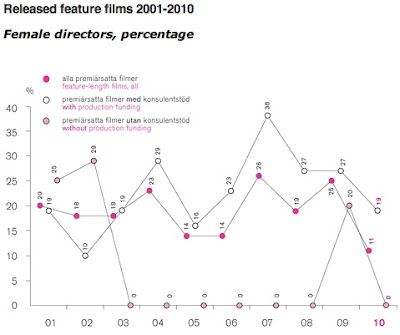 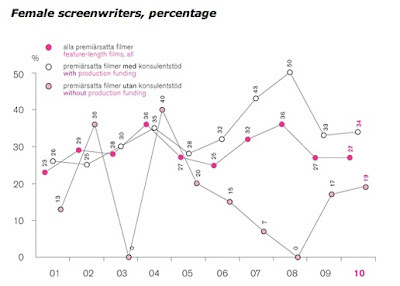 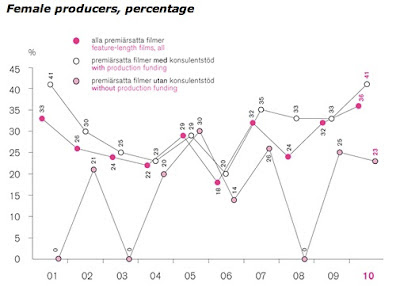 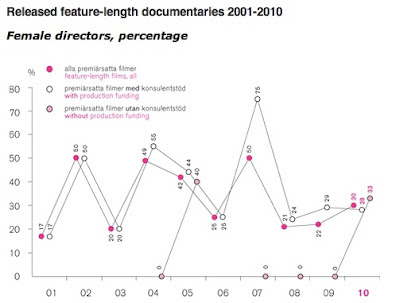 The state's commitment to gender equity in filmmaking appears to affect the tone of the few discussions I've read about women directors in Sweden. While acknowledging ongoing difficulties they also seem very solutions-focused for example here and (in more detail) here, where in 2010 Charlotte Denward of the SFI predicted a big breakthrough coming"; maybe that happened last week.Other Swedish activities also support the move to gender equity. There's the legendary Doris network founded in 1999, and its manifesto. There's the new annual 500,000 euro bursary from the Stockholm Film Festival towards the production of a woman's second feature, with runners-up receiving significant development funding. This year Lisa Aschan (She Monkeys) won the bursary for her horror film The Deposit. (Saying that her new project was 'not suitable' for the bursary, Aschan handed back the money, which then went to Sofia Norlin for her next film, Tenderness.)

I don't know any more than what's shown in these diagrams. For example, the SFI may fund more than seven features a year. Perhaps men directed all the other films it funded in 2012. I can't find the statistics for 2011. Nevertheless, 57% in 2012 is a lot more than 19% in 2010. It's a remarkable leap, and seems to illustrate what can happen when a government both encourages gender equality and invests in it.

European Film Awards
It's more difficult to speculate about the selection for the European Film Awards, without knowing about the process: whose work was considered and why, who lobbied for the selected work, who the selectors were and the criteria they used. But 8.5% is tiny. (I've added interview clips from the women who are up for the awards, and the film trailers below.)

In the coming weeks, the 2,700 members of the European Film Academy will vote for the selected films in the different award categories. The nominations will then be announced on 3 November, at the Seville European Film Festival in Spain. The 25th European Film Awards will be streamed live from Malta on 1 December. Will La Barbe be there to demonstrate? Or their Spanish counterparts? Maybe the 'Women Behind the Camera in Europe' participants at the Brussels women's film festival Elles Tournent - Dames Draaien will have more to add after their reflection and action day on Thursday! 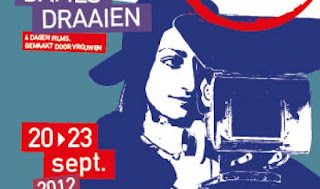 Women Behind the Camera in Europe
I'd love to be at the 'Women Behind the Camera in Europe' Reflection and Action Day. Participants include women from Belgium, Germany, France, the United Kingdom, Sweden, and Spain. They represent film festivals like the Festival International de Films de Femmes de Créteil and the Internationales Frauen Film Festival Dortmund/Koln, Women in Film & Television, and activist organisations like Sweden's Doris and Spain's Asociacion de Mujeres Cineastas y de Medios Audiovisuales. The day will focus on the current situation on women in the audiovisual sector in some countries (with case studies from Belgium, Sweden and Spain), present best practices to improve women's position and finally adopt a further action program. Further suggested actions include setting up a European network and an interactive database, which I imagine will build on and the groundwork established at festivals, in the Compostela Declaration (2010), the Brussels Declaration (2011), the European Women Audiovisual Network (EWA) and within Women in Film & Television. I hope that afterwards the participants post details about what they discussed and about their plans. In the meantime, I'm happy to celebrate the four women whose films are nominated for the European Film Awards!

The Women-Directed Features Nominated for the European Film Awards
Aida Begić's Children of Sarajevo/Djeca was in the Un Certain Regard section at Cannes this year where it won a Special Distinction of the Jury and it has been entered for the 2013 Best Foreign Language Oscar by Bosnian and Herzegovina's Filmmakers Association. Here's Aida talking about her working process at the Sarajevo Film Festival where Children of Sarajevo/Djeca won two awards, followed by the trailer.

Agnieszka Holland's In Darkness, nominated for a Best Foreign Language Oscar this year. The editing's a bit odd at the beginning of the interview clip, but I found it worth persevering. I learned a bit more about Agnieszka Holland here.

Here's Ursula Meier and then the trailer for her Sister/L'Enfant d'En Haut, which won a Special Award Silver Bear at the Berlin Film Festival.

* Martha Lauzen's recently published analysis provides a point of comparison. She researched the representation of directors of narrative features in twenty-three high-profile United States festivals in the year August 2011-August 2012 for Independent Women: Behind-the-Scenes Representation on Festival Films  and compared her findings with those from her similar survey in 2008-2009. The percentage of women directors of narrative features rose from 15%-18% in that time. The percentage of writers increased from 15%-21% and producers from 28%-29%. Martha Lauzen also found that in 2011-2012 39% of documentary directors were women in comparison with 28% in the earlier survey.