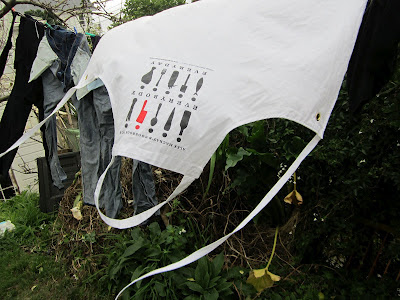 I agreed to write 4000 words about New Zealand women directors, for a book. And I delayed researching the New Zealand Film Commission (NZFC)  statistics, although I needed to know whether it practises gender equity in its investments. And I delayed comparing its investment in women writers and directors with New Zealand On Air's funding of women who write and direct feature-length television drama (there's some crossover). I knew I had to do the stats, to compare them with those I researched for my PhD (2009, link in sidebar), for a report for Women in Film & Television (late 2010), and intermittently for some of these blog posts, like the one where I celebrated gender balance in the NZFC's short film programme. But I'm a bit dysnumeric and counting's a chore, like hanging out the laundry.

Now I've done some of the work. I didn't go in to the NZFC to search its files and analyse the genders of people attached to funding applications, as I used to. I haven't looked at recent short film funding. Instead, I've analysed the information provided in a year's newsletters, from October 2011 to August 2012. The news is good and bad.

First, the good. This year the NZFC invested in production funding for seven new features. And for the first time ever, women and men are equally represented as directors. That's not just 'good'. It's wonderful! Many congratulations to all concerned!

The three women-directed features are Dana Rotberg's Medicine Woman, Gaysorn Thavat's Giselle, and Leanne Pooley's Beyond the Edge. A fourth feature, Jerusalem/Hiruharama is a doco directed by a mixed gender team: Christopher Pryor and Miriam Smith. I think this must be How Far is Heaven, which was in the New Zealand International Film Festival (NZIFF) and is now at the Paramount down the road (read about it here and here).

I've written as much as I know about Medicine Woman here. Giselle will follow a young ballerina who's been selected to play the role of Giselle, and performs it both on stage and in her daydreams outside the theatre, interpreting the essence of the role in her own life. Beyond the Edge also received funding from the NZOA Platinum Fund and the NZOA press release describes it as "an ambitious feature documentary covering Hillary's conquest of Everest"; it appears to be a hybrid doco/drama. Both Giselle and Beyond the Edge are produced by General Film Corporation (GFC)'s Matthew Metcalfe, so maybe he – like South Pacific Pictures (SPP)'s John Barnett – sees the commercial sense in recognising and supporting quality work from both genders.  I also notice that Dana Rotberg, Gaysorn Thavat and Leanne Pooley were all born outside New Zealand and because I've been thinking about the influences of diasporas on women directors outside New Zealand I'm wondering about these three directors and their work from another perspective. Have they got an impetus that's similar to those I've noticed among women filmmakers from other diasporas?

Unlike NZOA, the NZFC does not provide details about the production funding it commits to each project. It does however provide details for its feature Early Development (including Seed Development for writers without producers), Advanced Development and Finishing programmes; and for its awards. Here the news isn't so good. This year, the NZFC invested $486,230 in Early Development, of which $105,300 went to projects with women writers (I focused on the writers because in early development even films with producers quite often don't yet have directors attached): 22%. The NZFC invested $135,347 in Advanced Development, of which $45,500 went to projects with women directors: 33%. It invested $89,825 in finishing films that were in the NZIFF and only $10,000 of this went to a project directed by a woman: 11%. Finally, it gave six general awards valued at $190,000 in total; of this, only $50,000 was awarded to a woman. Of the NZFC's $901,402 investment all up, $210,800 went to projects with women writers and/or directors: 23%.

It interests me that my earlier research showed that the NZFC invested most often in women-written and/or -directed projects at the early development stage and least often in their production. Now the situation is reversed. And it's especially interesting given the gender of the finalists in the Script Writer Awards New Zealand 2012  (SWANZ)'s Unproduced Feature Script Award 2012. Women wrote seven of the ten final scripts and two of them contributed more than one: Casey Whelan (2!!); Jackie Van Beek; Linda Niccol(3!!!); and Maya Hammersal. Not one of these scripts is among those that the NZFC has invested in this year. Why not? Did the writers not apply for the Seed Development programme? Could they not find producers to apply to the other programmes?

Finally, the feature length dramas that NZOA has funded over the same period. There are four that the NZFC also invested in: Medicine Woman and three directed by men (one in the previous year's NZFC funding decisions). The fifth, Field Punishment no 1, is written by Donna Malane and Paula Boock, who produce their own work as Lippy Pictures. NZOA invested $4,757,173 and of that they invested $2,942,839 to projects women wrote: 61.86%. From memory (I'm now running late on a Friday afternoon) this is consistent with its past record. NZOA is required to consider diverse audiences and women writers have historically participated strongly in writing for television.

Field Punishment no 1 is the fourth of Lippy Pictures' feature-length scripts to be produced, following Until Proven Innocent (nominated as a finalist in 10 categories of the Qantas Film and Television Awards 2009, winning 5 of them, including Best Drama Programme), Bloodlines (for Screentime, NZWG Best Drama Script) and Tangiwai - A Love Story (finalist in the NZWG - Best One Off Drama and winner TV Guide Best One-Off Drama). These two writers (who to date have worked with men directors) seem sure-fire winners for the NZFC to invest in (as well as NZOA) but this year that hasn't happened, perhaps because Lippy Pictures hasn't applied.

The women who wrote the finalist scripts in the Unproduced Feature Script Award and Lippy Pictures and its successes demonstrate that there are talented women around in whom the NZFC could invest with confidence. Where are the barriers? Does the NZFC remember what Peter Jackson said, almost three years ago?


My only advice to anybody is that it's about individuals. The strength of a film industry is based totally on the strength of the individuals, the creative individuals working within it, the writers especially, the directors and the producers and whatever can be done to talent hunt, to find those people and then train them and support them. We're not talking about many people because in an environment where a lot of people want to be a filmmaker or think they can write a screenplay, not many people can, quite honestly, and it's a case of finding those people and nurturing them. That's what a healthy film industry is, it's not really to do with infrastructure or anything else, it's about finding talent and nurturing that talent.

The writers especially. The women I've named have talent and are already trained. How can the NZFC better support them? Will the NZFC ever establish a gender equity policy, as is appropriate for a body that disburses public funds? Will it ever emulate the GFC and SPP policies around gender by seeking out the best regardless of gender? I hope so, and that the NZFC investment in women will soon reach the 50% level across every one of their funding programmes and remain there, whatever strategies it uses to achieve this.


Coda (a day later)
Last night Juliet Bergh and Jessica Charlton won the SWANZ Best Feature Script and Best New Writers Award for Existence, the first-released feature from the NZFC's Escalator lo-budget programme. Shows (again) what women can do if they are supported! Warm congratulations to Juliet (also the director) and Jessica, and to all who nurtured them through Escalator; when I heard the news I also remembered the writers' script advisor, the late Graeme Tetley, and know that everyone concerned will be acknowledging his contribution.

And Linda Niccol won the award for Best Unproduced Feature Script! Warm congratulations to her, too! Let's hope the NZFC and NZOA will jump into support Linda's Miss Adventure (& more!)

And a final word from veteran Gaylene Preston.