July 06, 2012
Here's the final instalment of films by and about women in the New Zealand International Film Festival: men's documentary films about women.


1. Edith Collier (1885-1964) has a very special place among New Zealand women artists and in my heart; I once helped organise an exhibition of her work, I love her drawing and her blues (see above for one of them) and her story touches me. Born in Whanganui, she left for London in her late 20s to study art; her painting flourished, and she experimented with modernism alongside fellow expat Frances Hodgkins. She returned home after World War I to family duty, and ridicule for her art (her disgusted father set fire to her nudes). There's a book about her by Joanne Drayton, who also wrote the Edith Collier entry in Te Ara. Michael Heath has already made one film about her, A Light Among Shadows (2007). Now, he's made another, Village By The Sea, about Edith's time in Bunmahon, an Irish fishing village, in the summers of 1914 and 1915.

Little fragments here and there online, but nothing dedicated to the film and no trailer. 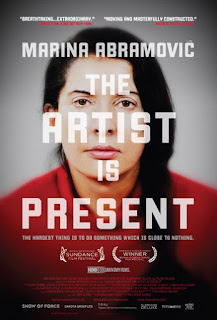 2. Matthew Aker's Marina Abramović: The Artist is Present is about a 'seductive, fearless, and outrageous' contemporary artist (b 1946), and her major retrospective at New York's Museum of Modern Art.
Website
Facebook
Twitter

3. Pictures of Susan, directed by Dan Salmon, is about Auckland artist Susan King who stopped talking in 1955 when she was four  and has said nothing since. The art world discovered her  art brut a few years ago and Dan Salmon began filming Susan in 2008. A trailer is here, but not available to be embedded without permission, and I have no way to contact Don. No social media I can find.

4. Morten Henriksen has a fascinating family connection with Karen Blixen (Out of Africa) and has drawn on it for Karen Blixen - Behind Her Mask, one of the festival's lunch-time screenings.

Website and trailer here (in Danish, but looks gorgeous)

And that's it, unless I find I missed something! Happy festival to all!