June 24, 2012
When Her Film's Kyna Morgan visits Wellington next month, we're going to a very special opening night, for Desiree Gezentsvey's play Nuclear Family, 'a comedic drama set in green New Zealand on the eve of the Chernobyl disaster, following a colourful bunch of Venezuelan and Soviet Jewish immigrants as they are forced to question whether freedom and control over one’s destiny are only illusions'. Desiree, based in Wellington, wrote the play for her daughter Yael, who will play all twelve parts. Nuclear Family premiered at the Adelaide Fringe Festival, went on to London and to the Edinburgh Fringe Festival and has had excellent reviews. It also won Desiree the Best Stageplay Award (Script) at the 2011 Moondance International Film Festival Competition. And now it's coming home.

I met Desiree through the International Institute of Modern Letters where we both did our script writing MAs with Ken Duncum (Desiree also writes screenplays and poems), and she's one of my most life-enhancing mates. I associate her with laughter and affection as well as amazing talent — her heart shines through in everything she does. When we work together we always have a great time. And I love the way her family works together. Another daughter, Lara, is Nuclear Family's publicist and the rest of the family helps out too. More details in the podcast, and below.

Many thanks to Laura Daly at Wellington Access Radio for all she's taught me about being a techie and for being my techie this time, and to Nik and Tony who've also helped me learn how to be my own techie when I've recorded the ten podcasts to date. It's taking me a while, but I'm getting there! 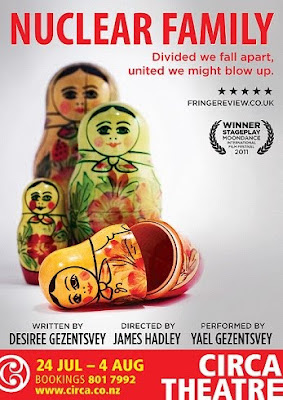 Desiree
Born in Caracas, Venezuela, Desiree has lived in New Zealand since 1985 with her husband and three daughters. She has a BA in Modern Languages, an MA in Creative Writing – Scriptwriting from the International Institute of Modern Letters Victoria University of Wellington (VUW), and an MA in Literary Translation (VUW). She has had plays and short films produced, and has published a bilingual book of poetry, Next Time Around / La Próxima Vez, which deals with the subject of immigration and separation from loved ones. Her poetry piece Under the Southern Stars was recorded and broadcast by Radio NZ, and seven of her poems were set to music by award winning NZ composer Dorothy Buchanan. Desiree has also been involved in various projects as script development consultant, and has translated fiction, poetry and theatre from English to Spanish and Spanish to English.

Yael
Yael is a graduate of both VUW and Unitec (Auckland) in New Zealand, where she completed degrees in Film and Theatre, and in Acting. Over the last eight years, she has worked as an actor, producer, director and writer on various stage and screen productions including the TVNZ Sunday Theatre television feature film A Piece of My Heart and her own play Paper Scissors Rock.

Lara
Lara Phillips is a freelance senior copywriter and arts publicist based in Wellington. She has nine years experience working for various advertising and design agencies including Clemenger BBDO, and Auckland based Sugar and .99. She has been the senior copywriter on the award-winning Air New Zealand (Winner of the 2009 RSVP Grand Prix and RSVP Customer Engagement Gold Awards), New World and Westpac campaigns, and the copywriter on Honda, TSB Bank, Mainland Cheese and Alac, to name a few. She was also the publicist for the BATS Theatre show Paper Scissors Rock in August 2010.