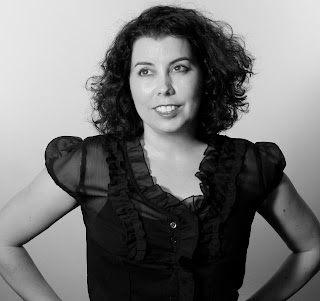 Ever wondered what the Cannes Film Festival is like for the women directors who get there? Destri Martino, based in Los Angeles, was one of them this year, when her animation The Director screened at the American Pavilion. I love her UNGLAM CANNES blog, which she calls ‘A place to track my growing list of neuroses as I prepare to attend the 2012 Cannes Film Festival’ and where she’s still adding useful info from her experience.

Destri’s typical of many very hardworking and serious women filmmakers in the second decade of the 21st century. She’s highly educated (USC, UCLA, London School of Economics) and highly experienced—in commercial, music video and film production teams in a variety of roles, from p.a. to production manager. She’s been exposed to an array of directing styles and aesthetics from the likes of the late Phil Joanou, Mika Kaurismaki, Mike Nichols and Michael Bay and has also worked for the prolific John Wells Productions, makers of programmes like ER and West Wing.

Destri currently writes and directs the award-winning webseries Mixed Blooms, a ‘fresh-cut comedy’, distributed on YouTube and BlipTV, partially funded—of course!—through Kickstarter. She’s very active in social media. And in her day job—feeding her filmmaking in more ways than one—she produces marketing, recruiting and training videos in-house for law firm Sheppard Mullin. In this podcast, Destri talks about The Director, her Cannes experience, Mixed Blooms, and her practice. She is now scripting a horror feature.