October 19, 2009
Playwright and screenwriter Andrew Bovell (Lantana, Blessed—directed by Ana Kokkinos, an interview with her here—and the forthcoming Edge of Darkness) visited the Institute of Modern Letters the other day, a great place for treats-for-students. In a workshop, Andrew Bovell suggested that it's useful to look at what a main character first says and first does in a screenplay, and then at what she says and does at the end. "Is there a reversal, or a question answered?" If so, the writer’s done her job.

And because I’d just finished my thesis, I wondered whether Andrew Bovell’s question would be useful there, too. In the thesis' Introduction, I described the evidence that shows a general problem—in New Zealand, it's more difficult for women to tell their stories as feature films than it is for men:

That's how it is, though the NZFC figures have improved recently. Yesterday's Women & Hollywood story on foreign features up for an Oscar indicate that it's pretty much the same everywhere: sixty-five films on that list, and only seven with women directors.

(And Meryl Streep recently provided another of her insights into how it all works. She thinks that the industry is 'scared' of making films that appeal to women. “It’s always a shock to the studio when a film like Mamma Mia does well,” she said, “because men run the studios and live their own fantasies through them. It’s harder for a man to jump inside a woman character’s mind and imagine, ‘This could happen to me’. They see it and they understand that there is a market and it will make them an enormous amount of money. But we all respond to instinct, and it’s their inner boy that jumps up and goes, ‘Yeah I wanna see another G.I. Joe!’”)

My thesis' Conclusion begins with a quote from Jane Campion:

[Women] must put on their coats of armour and get going because we need them.

And it ends with an answer for just one person: me, the writer who posed the problem at the beginning. It's an answer-as-two-character-action:

The chief cheerleader and I help each other make our armour, with chinks, and with Velcro for easy removal. We put it on and we move forward.

Anyway chief cheerleader Erica, aka the producer, and I have our armour on, and we’re working on Development's development, sometimes accompanied by Nancy Coory, who will play Emily. Here she is. What a star. 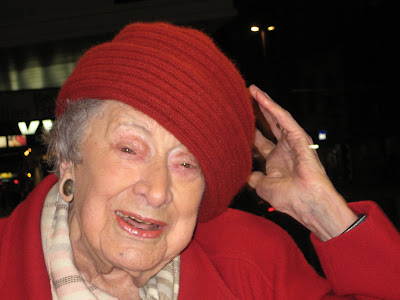 Emily's very old, her battles for justice behind her. But then she meets filmmaker Greta. And takes on one last campaign.

A Wellywood story to touch your heart.

Here we are—without armour—out in Courtenay Place, Erica on the left, with Nancy pulling us forward. She's an inspiration. 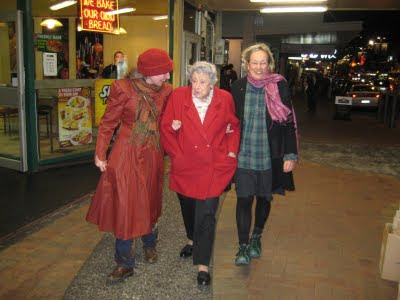