July 04, 2017
NB All these #NZIFF 2017 posts are joined together and looking beautiful over on Medium.


Every year, Women & Hollywood counts the #DirectedByWomen features at Cannes, in the various categories. This year, the site noted a slight increase, to 29 percent overall.

To compare, for the first time since 2014, I've just counted the New Zealand International Film Festival (NZIFF) features listed in its Wellington catalogue. I included docos, but excluded the animation and short film programmes.

I used to feel that I was the only person concerned about the NZIFF stats. That's no longer so. Many more people now want there to be gender equity behind the camera and to explore ways to make this happen. Many more people are also concerned about representation in front of the camera, about how we're all affected by seeing the world primarily through the white male gaze. Actor Jessica Chastain is one of these.  This is what she said at the final press conference, after she sat on the main jury at Cannes this year and it's important partly because the NZIFF accesses some of its films from Cannes–


Are we being offered Cannes features with ‘disturbing’ portrayals of women? Is this an issue for the NZFF? It would be good to know.

In this year's list, 38 percent of the features have female protagonists, interpreted generously to include films where females are part of a central couple or threesome. Almost two-thirds of these are directed by men, 5 percent by mixed gender teams and 34 percent #DirectedByWomen.  This compares 32 percent of the features with female protagonists (including docos) #DirectedByWomen in 2014, 64 percent by men and 4 percent by a mixed team, so that's no improvement. This year, if my calculations are correct – and I'm not always totally reliable, even and sometimes especially with spreadsheets, so please let me know if I'm mistaken – there are just 21 films #DirectedByWomen and about girls and/or women: 12 percent. And that's a tiny tiny proportion, isn't it?

There are many more features #DirectedByWomen and about women and girls now available. And there are diverse and excellent festivals that find and select them. For instance, at the Los Angeles Film Festival last month, 42 percent of the films were #DirectedByWomen and 40 percent by people of color. Close to home earlier this year, just up the road in Otaki, 60 percent of the Māoriland Film Festival films were #DirectedByWomen. Is it time for the NZIFF to work a little harder, maybe even to attend the big women's fests, like Créteil in France, the Seoul International Women's Film Festival, the Dortmund/Köln International Women's Film Festival as well as indigenous festivals like ImagineNATIVE?

I love going to the NZIFF. But I want it to do better. Here, in alphabetical order by director, are this year's long-form dramas directed by New Zealand women.

According to the NZIFF programme notes, written by the ever-insightful Jo Randerson, Jackie's philosophical enquiry focuses on mothering, daughters, boyfriends and the after-effects of sexual encounters. Here's the trailer. Jackie will be present for Q&As at the screenings. Top of the Lake: China Girl

And it's good to see NZ veteran producer Philippa Campbell in there with all the other executive producers and producers.

From the NZIFF catalogue: 'An intimate epic that touches upon everything from sex work and surrogacy to patriarchy in the digital age and the instinctive push towards parenthood…' 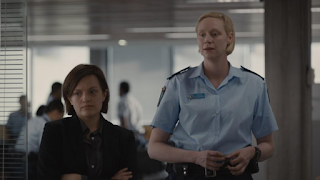 Each writer and director contributed a sequence to this feature, which unfolds around the tangi of a small boy, Waru, who died at the hands of his caregiver. 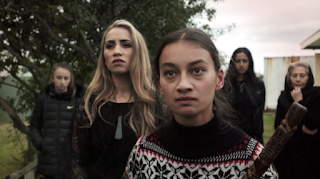 This is the feature I've been waiting for – along with many others – partly because we haven't seen Māori (and other) characters through Māori women's eyes in a drama made for the big screen since Merata Mita's Mauri, thirty years ago.

Last year, the Waru group gave an extraordinary presentation at the national Big Screen Symposium, which you can listen to at the link here. I found it very powerful because of  'its in-depth discussion of how we come to our truths and how we support one another to access and speak and show our truths...a ‘how-to’ talk par excellence, with eleven different perspectives...‘how-to’ with heart, intelligence, courage, humour and spirit'.

And now, in the NZIFF catalogue, distinguished broadcaster Mihingarangi Forbes has also acknowledged the courage of the group and describes the finished work as 'a hugely important film', with 'electrifying' and 'powerful' performances, as a film 'everyone in the family should see and talk about'.

So I'm surprised and disappointed that Waru is not included among the NZIFF's Big Nights, as a Special Event or Special Presentation, especially when only four of the fourteen Big Nights features are #DirectedByWomen.

In the printed catalogue, Waru is grouped among nineteen other 'Aotearoa' features, both dramas and docos. And as the only Māori one, the only Māori feature this year, as the first Māori women's feature for three decades, as a 'hugely important film', wouldn't it have been the ideal Special Event with which to open the festival?

There are other reasons for this, too. The shameful child abuse rate in Aotearoa is or should be a central concern for every single New Zealander. And Waru also includes karanga, integral to the beginnings of so many Māori events – the electrifying performances Mihingarangi Forbes describes are those of the actors playing Waru's grandmothers, 'demonstrating their skill in the art of the karanga...their wailing and laments call on their ancestors to safely take their mokopuna'. How wonderful it would have been to begin the festival with a film that included karanga. But at the very least Waru should have been named as the Special Event, Special Presentation that it undoubtedly is.

In addition, and like The Inland Road, Waru doesn't get a single screening in the most attractive and comfortable cinemas, the big Embassy or the smaller Embassy Deluxe. Instead, it's along the road at the much-loved but shabby Paramount. Take a look at the qualities of the features by New Zealand and other male directors that do get a screening at the Embassy and see if you agree with me that the NZIFF could have been, should have been, more welcoming to and appreciative of Waru (and The Inland Road).

Of course, it's possible that those involved with both films are entirely happy with the NZIFF's reception of their work. I'm not. But I'll be online getting my tickets just as soon as bookings open in the morning. And listening closely to the Q&As. 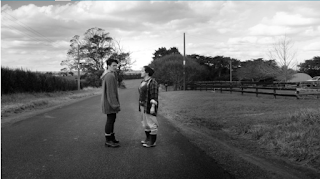