October 30, 2016
I'm delighted to share Kate's illuminating article, because film festival selection is a global issue for #womeninfilm, even here in New Zealand at the New Zealand International Film Festival.  Many thanks, Kate!

And thanks too, for Catherine's photo and Reggie's concept photos, developed for Kate's celebrated Bluestocking Film Series (Bstkg).

As the founder and artistic director of the Bluestocking Film Series, this IndieWire headline caught my attention immediately: 'Women Directors Are Everywhere, But Film Festivals Are Still Catching Up — NYFF'.

Now in its 7th season, Bluestocking Film Series’ mission is to celebrate and amplify women’s voices and stories, and is part of a long tradition of women-centered festivals, so I immediately wondered which film festivals the article was referring to.

The first paragraph of the article jumps in to rightfully celebrate Ava Duvernay, (being the first Black woman director to open the NYFF) and to note that at least 2 films screening at the festival featured women characters who are not only over 25, but more than twice that age.

However, once the writer of the article, aspiring critic Lauren Du Graf, brings in Lesli Klainberg of the Film Society of Lincoln Center as the authoritative spokesperson for the NYFF, the tone of the article takes a turn.

Let's start with Klainberg’s thinly-veiled elitism, as she points out that the festival selects only those films that are 'the most significant of the year' without regard to any special criteria.

If you’ve seen it, you know that Duvernay’s film 13th is an important film, even a seminal one, but why shouldn’t we notice (and applaud) the fact that the film’s director is both a woman and of color? Klainberg goes to great lengths to assure us that this film was chosen to open the festival based solely on its appeal to NYFF audiences as an important film: 'We didn’t choose Ava’s movie for the opening night because we wanted to make a statement about documentary film, or about people of color, or about women'.
But why not? Would that be such a terrible thing to do? Isn’t it important for the exact reasons Klainberg seems so ready to downplay? Even putting aside Klainberg’s convenient memory loss about a White male-dominated industry, Duvernay has made an important film about racial injustice in this country, and she’s a woman director of color. Why not celebrate all of that? The rest of us are.

The next few paragraphs tell us that despite the lack of women directors in the Main Slate (which, don’t forget, we’ve been told use strict—albeit non-specific—curatorial standards in selection), the full program reaches about 30% parity for women directors/creators.

Not bad at all, if you’re going by Hollywood standards. But then Klainberg is quoted as saying, 'I’m pleased to see that we have five of 25 of our films in the Main Slate directed by women…That’s certainly a reflection of where female filmmakers are in our industry in a certain respect. We are gaining and it’s getting better'.

I don't know where she gets her statistics, but five out of 25 hardly reflects the actual state of working women directors in the U.S. film industry where, this very article points out, just 4% of the 800 most popular films in 2015 were directed by women. So clearly, it is not actually getting better. At this point, we wish we could get to 20%, but if history teaches us anything, gender parity is still generations of women filmmakers into the future.

Proudly stating that five out of 25 Main Slate films at NYFF in 2016 are directed by women, when last year the number was three out of 26, certainly does prove where 'female filmmakers are in our industry'. But only if your expectations are at rock bottom, can you call adding two additional women filmmakers to your program a gain.

But honestly, what bothers me most of all about this article is the complete erasure of the long tradition of women's film festivals which, whether you agree that they should exist at all, have nevertheless celebrated the work of women directors, brought women-centered work to the attention of audiences and the industry, and certainly also aspire to strict curatorial standards. After all, it’s in our own best interest to select high-quality films that show what women directors are capable of.

When selecting for Bluestocking Film Series, I’m always aware of the industry- and media-perpetuated myth that men aren’t interested in and won’t go see female-driven films. What that knowledge instills, however, is a determination to find the widest possible range of expression from across the globe to dispel that myth. If we’re to survive as a festival that focuses exclusively on on-screen representation, it’s in our own best interest to demonstrate just what we have to offer to the culture: a well-curated, unique blend of women’s voices and stories that you won’t see together anywhere else.

What role do festivals like NYFF play in repairing broader, systemic inequalities in the film industry, such as gender disparity among directors? 'I don’t know if that’s our role', said Klainberg. 'We are not a film organization that funds movies'.

This is another misleading and, in my opinion, damaging statement. Very few festivals fund, yes, but that doesn’t mean your film festival isn’t still an important step on the career ladder for emerging filmmakers, or a possible conduit to distribution.

Are women-focused film festivals the red-headed stepchild of the long-standing engagement between festivals and the industry? Are we best forgotten, somehow shameful? Women’s contributions to film art have systematically been erased, yet the history of women in the film industry is long and rich. To attain cultural balance, we all deserve to know about those contributions and that history.

And women’s film festivals with strict curatorial standards (however those may be defined) are still necessary to showcase a larger percentage of talented women working in the field than you normally would get to see at, say, the NYFF. And Klainberg seems to be saying that festivals should not actively work toward gender balance because it will happen naturally. Yet that hasn’t been the case, either in film festivals or the industry.

But what’s more, we need women like Du Graf and others who gravitate to film criticism to stand with those of us actively addressing representation and, at a minimum, do diligent research and acknowledge the contributions women in film have already made (and continue to make) without sugar coating what is still, culturally speaking, a dire situation.

As I’ve been writing and thinking about this article, I’ve heard from a diverse range of women filmmakers and change makers who are also troubled by the broad strokes and lack of research this article demonstrates.
Briony Kidd, founder and artistic director of Australia’s fine women in horror festival, Stranger With My Face, said, 'I would have hoped we could have moved on from this kind of thing by now. It is demonstrably not true (emphasis mine) that women are only interested in a certain type of ‘smaller’ film and perpetuating that idea is harmful, in my opinion'.

And Kyna Morgan, founder of Her Film Project (an advocacy group for women directors) says–


I get it. Who wants to admit that they, as a woman or person of color or anyone of a minority group who is non-white male-identified is effectively shut out because of implicit bias or overt prejudice to who they are? I get it! But being shut out is one of the hardest things we have to look at and own up to when it comes to festival programming, studio slated projects, and practical funding issues, and festivals and studios are still wearing blinders. No one WANTS to be part of the group(s) that the 'big guys' are shutting out. It's a 'great American myth' that anyone can make it as long as they work hard. We sell the idea that Hollywood and film festivals operate as meritocracies and that smaller films don't get made just because they are small films. I think we know better than that and that one of the ugly sides of confronting inequity and inequality is that there simply are certain groups of people (i.e. white males), who, even with smaller films (and sometimes even little to no feature directorial experience) have a better chance at securing funding, being offered directing gigs, and being programmed at film festivals. The proof is in the data.

In short, no matter what kind of film you want to make, the playing field for women, minorities, and any identities other than the default is still far from level and we all know that. It’s time for the top tier festivals, whoever and wherever they may be, to step up their film inclusion game.

So, once again, I call for solidarity among all of us who want to see film culture evolve and expand, to see the film industry reflect the small, and the profound, along with its wish fulfillment and larger-than-life fantasies. Let’s celebrate and amplify women’s successes in the field — especially those moments when we make history as Ava Duvernay did at this year’s NYFF — and let’s make room at the table for all the voices. 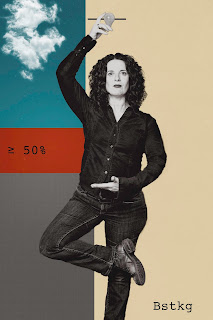