The Rehearsal is Alison's third and long-awaited feature. She also wrote the script, with Emily Perkins, from Booker Award-winning Eleanor Catton’s first novel. It is produced by her long-time collaborator Bridget Ikin, with Trevor Haysom. “I wanted it to be an intimate, authentic experience of what it’s like to be a young person in New Zealand now,” said Alison, according to the festival’s announcement.

Alison also made the classic Kitchen Sink, that debuted in Cannes in 1989 and won lots of awards. In the early 90s, after making her first feature, Crush, which played in Competition at Cannes, she disappeared to the northern hemisphere, where she made a second award-winning feature, Jesus’ Son; and directed lots of commercials and some shorts, as well as episodes of Sex and the City, Carnivale, The L-Word, Homicide and The Tudors. She also co-directed Persons of Interest, a series of interviews with New York Arabs and Muslims detained on immigration charges after September 11th 2001.

Here’s more about The Rehearsal, from the festival’s site. And just look at that cast!–

Unpacking the dramas that energise a class of budding young actors, The Rehearsal mounts an enticing inquisition of performance, identity and moral anxiety with resonance far beyond its hothouse setting. 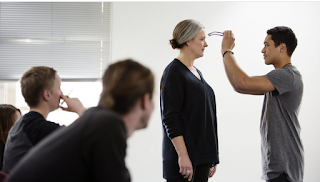 James Rolleston [from Boy, The Dark Horse, The Dead Lands] vanishes into the part of Stanley, a naive newcomer drawn to the city by his passion to make it on stage. While his new best friends indulge in wilder stuff, gentle Stanley tentatively romances 15-year-old Isolde (Ella Edward).

His sweet dreams may have found their nemesis in Hannah (Kerry Fox [o wow!]), the school’s grandstanding senior tutor. Students must deconstruct themselves, she contends, before they can play at being anybody else. Stanley gradually bends to her taunting style, until, in one of the dazzling turns that stud the film, he earns her applause with a hilarious, treacherously accurate impersonation of his salesman father. Even murkier waters await when his class decides that a sex scandal involving Isolde’s older sister (Alice Englert [remember her from Sally Potter’s Ginger & Rosa?and, in a lovely New Zealand connection, Jane Campion’s daughter]) should be intensively researched for their end-of-year show.

Like the novel, the film is as attentive to the misleading effect youthful nerve can have on the ‘mature’ as it is to the crises the teachers so blithely incite in the taught. It’s also its own sharp, original thing, a film by Alison Maclean, alive with ambiguity and cinematic verve.

I can’t wait to see this!