I’ve emerged (briefly) from researching the 1930s and 1970s. Freshly aware how quickly women writers and artists and their histories are lost. Not only in New Zealand. The other day art historian Griselda Pollock wrote about how England’s National Gallery is erasing women from the history of art. And I’ve noticed something similar myself, seeing how a New Zealand woman artist's feminism can be erased in just a few years, when an exhibition catalogue omits her participation in feminist exhibitions and a book about her explicitly denies her deeply valued contributions to the women's art movement. I'm re-motivated to make a formal record of women artists' work, starting here.

So, in case her achievement is forgotten, warm congratulations to Michelle Joy Lloyd, whose Sunday just won Best International Feature at a major international women’s film festival, the Female Eye Film Festival in Toronto. Thanks to Sarah McMullan for her Facebook post about this delight.

In development news, it’s exciting that Briar Grace-Smith and Ainsley Gardiner (best known as a producer but also writer director of short film Mokopuna) are writing a feature animation, The Song Jar, which ‘turns the child-parent relationship on its head’. And women are strongly represented in the four projects selected for the most recent Script to Screen Writers Lab. This is yet another triumph for women writers in a tough competition where entries were blind read: Script to Screen’s and the New Zealand Writers Guild’s use of blind reading in their initiatives, I believe, is currently the most effective contribution to quality and diversity in New Zealand film that there is. Warm congratulations to Ghazaleh Golbakhsh with her At the End of the World, Rachel House with Mitch Tawhi Thomas and their Hui and Gaysorn Thavat and Sophie Henderson with The Justice of Bunny King. Read more about these writers here. I'll keep an eye out for the projects as they move through development.

And it’s New Zealand International Film Festival time again (and for those of you outside New Zealand, no, it's no better here than anywhere, from a gender perspective). Christine Jeffs selected six finalists for the New Zealand’s Best Short Film competition, from preselection by programmers Bill Gosden and Michael McDonnell. Women wrote and a directed two of the films: Alyx Duncan’s The Tide Keeper, home at last after a very successful circuit of international film festivals, and Hash Perambalam’s Not Like Her.

There’s a beautiful Tim Wong interview with Alyx Duncan here, when she released her feature The Red House (and I'm excited to see Tim’s own film in the festival, Out of the Mist: An Alternate History of New Zealand Cinema, narrated by Eleanor Catton). But I couldn’t find much about Hash Perambalam, born and raised on Auckland’s North Shore. So she sent me the film and I sent her some questions.

A decade of being bored by body image conversations while also being acutely aware that negative body image seriously messes people up - especially teenagers. I think this sensibility contributed to the overall tone of the film - it’s not preachy but it’s not a joke either.

The mother-daughter dynamic was inspired by seeing things like Thinspiration blogs on Tumblr and thinking about the people who made them and the people who frequent them. I started thinking about what kind of mothers they would make if they were to ever have children and what kind of children they would raise if their body image issues were to go unchecked. We are told that motherhood is a sacred and precious thing, so the image of a mother hating herself and hating her daughter for looking like her was striking to me.

I would say that Not Like Her is my first ‘proper’ film. I’ve made other small things while at university, mostly about teenagers, mental health issues and romantic relationships. I don’t think I’ve sussed my style yet but I’m getting there. I made Not Like Her as part of a year long Masters thesis in Screen Production at the University of Auckland.

I wrote a few short stories earlier in the year and one of them was chosen as the basis for the Not Like Her script. There was a course requirement for students to crew on three of their fellow student’s films. As long as this crewing requirement was met, the university was flexible with letting us acquire other cast and crew members from outside the uni. My supervisor was Brendan Donovan (The Insiders Guide to Love, The Insiders Guide to Happiness) who supported and mentored me throughout the process of making the film.

The university is a good environment to make mistakes and to learn. We were provided with gear and an editing facility which was also really helpful.

In terms of disadvantages… people can be quite critical of working on student films. Mainly because we’re still sussing things out and because we have no money. Fair enough I guess. On Not Like Her I was fortunate enough to be working with professionals who didn’t seem to mind too much about these things.

Thanks! The cinematographer was Grant McKinnon. He also shot Ross and Beth which screened in the New Zealand’s Best section at NZIFF last year. 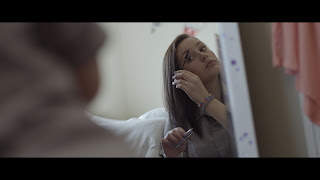 I experienced the film as a feminist work.

Feminism is relevant to me because I’m a woman trying to direct films in a male dominated industry. But when I’m writing I don’t particularly have a feminist agenda. My main priority is to depict my characters, whether male or female, in an honest way by allowing them to have a voice that I feel is genuine.

Sometimes the responsibility to write female characters with feminism in mind is a nuisance because you start second guessing everything that you write. For example– I don’t mind having my female characters do cringey things like pining over men or boys or whatever because I think it’s natural. But some might view this as weak characterisation. It can get silly if you get too caught up in it. Anyway- I don’t like second guessing myself so I basically just do what I want to do. In regards to Not Like Her… the mother and daughter behave in a toxic way which is at times unlikeable. I think this, combined with the fact that’s its a film that deals with body image (something which is often incorrectly labelled as solely a female issue), contributes to it being viewed as a feminist work.

What films or filmmakers, artists or writers influence you?

My favourite films are ones which have rich characters usually with various mental health issues. Some of my favs include There Will Be Blood, Dog Day Afternoon and The Aviator. Those are the films that I would watch over and over again in high school. I’d get something new out of it each time because the characters had so much depth to them. There aren’t many films on that scale with rich and compelling female characters. So for that reason I admire the work of Andrea Arnold, Cate Shortland, Lynne Ramsay and Xavier Dolan.

What's next for you?

I am currently working on a few short stories. I’m developing one of them into a script for another short film about power dynamics in romantic relationships. Should be painful/fun if all goes to plan! 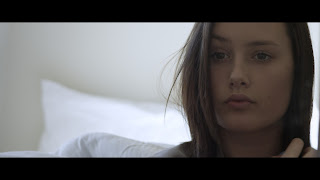