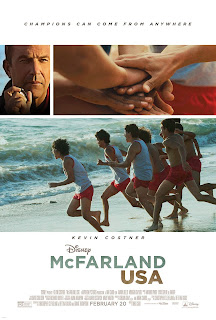 Yes, champions can come from anywhere. And New Zealander Niki Caro's a champ, director of McFarland USA. But she's the only woman director on the Disney list for 2015, which includes Pixar films. Furthermore, there's only one film on the list with a female protagonist, Pixar's Inside Out, an animation 'told from the perspective of the emotions inside the mind of a girl' and written and directed by men.

This is no good for those of us who enjoy films by and about women and girls. But on this first day of 2015 – happy new year to all! – I'm delighted to celebrate a new film by Niki Caro, her first since A Heavenly Vintage (2009).

McFarland USA is based on a true story about Jim White, a teacher (played by Kevin Costner) who noticed that young Latino farm workers ran great distances each day just to get from their exhausting jobs to school and back home. He creates a cross-country team and transforms the team into a state championship powerhouse.

In a USA Today article Niki Caro says that the story focuses on White's perseverance to create the team and his unconventional runners' inner strength, which was forged through hardship.

Niki Caro was inspired by the runners' physical, mental and spiritual endurance and immersed herself in the lifestyle. "My mandate is to be culturally specific and authentic. And I backed that vision all the way," she says, in the USA Today story. "I hope this story breaks new ground in the types of stories Disney tells." She took up long-distance running herself and insisted on shooting part of the production in McFarland, despite the cost. The cast, a mix of actors and McFarland runners, lived together and trained extensively to truly inhabit the team-running lifestyle.

"It's very cinematic. To see them running in the fields with the dust kicking off their feet with the sun going down. I had a very strong feeling for what the story was and how I could put it on the screen," says Caro. "I knew I could make it beautiful but keep it absolutely real."

Opening in the US 20 February, Australia 12 March, no New Zealand date on imdb.