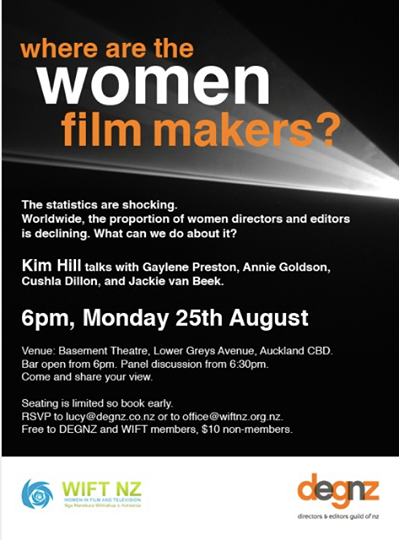 Every so often magic happens. Like this public meeting organised by Directors & Editors Guild of New Zealand (DEGNZ) and WIFTNZ. I was sad I couldn't go and look forward to seeing the video that was recorded, as shown in the audience pic below.

Many thanks to DEGNZ Executive Director Fiona Copland and to Lucy Stonex, for this brief report of the historic event, including the pics, followed by my response. For those of you not familiar with New Zealand, Annie Goldson is a documentary director and producer and academic, Cushla Dillon is an editor, Gaylene Preston is a director, writer and producer in film and television and Jackie Van Beek is an actor and a writer and director for stage and screen.


Responding to the release of some concerning international statistics, members of DEGNZ and WIFT gathered in Auckland last week to talk about gender imbalance amongst directors and editors in the NZ screen industry. Broadcaster Kim Hill moderated a discussion with panellists Gaylene Preston, Annie Goldson, Cushla Dillon and Jackie van Beek, looking at why the imbalance exists and what can be done about it.

The statistics are not readily available for television but are clear for film: in New Zealand only 17% of dramatic features with New Zealand Film Commission (NZFC) investment are directed by women. Women are accessing less than half their appropriate share of public funding for film. The packed house at the event expressed overwhelming support for affirmative action to address this imbalance, by way of a targeted fund.

DEGNZ will collaborate with NZFC and New Zealand On Air, to more fully analyse the data available and look at ways to move the discussion forward. Let us know your view.

An earlier online report stated that the panellists ‘had varying views on how the situation had arisen and what could be done about it’. This isn’t surprising of course. It’s inevitable that a New Zealand discussion will echo global debates, where views also differ widely.

I'm curious about the representation of screenwriters, directors and producers in the audience and hope that there’ll now be a supplementary inquiry amongst women practitioners throughout the country. Even a brief questionnaire would be great.

Because the issues are so complex, I also look forward to a vigorous debate about what strategies will best encourage gender equity in New Zealand filmmaking. I love women's funds, but who would benefit from the one being proposed, and how? What's happened in the past with state-funded women's film funds? What can we learn from that? What's the range of contemporary approaches and how well are these approaches working?

Building on previous posts about Sweden, its A-Rating For Activists, supported by the Swedish WIFT and the Swedish Film Institute; about Anna Serner, director of the Swedish Film Institute; about France's Charte d'Egalité; about women behind the camera in Germany (the latest federal stats are here); and about the hugely influential European Women’s Audiovisual Network, founded by Spanish women directors and now led by Francine Raveney, formerly of Eurimages, the pan-European film fund.

What can we learn from them?

The Pipelines to NZFC-Funded Production

Back in 2008, as part of my PhD work, I wrote a report about the various NZFC funding programmes. When the then CEO of the NZFC – Ruth Harley – read the report, she acknowledged that the NZFC had a 'gender problem'. But (again) it was complicated and has become more so. Until recently, the NZFC's Short Film programmes were supposedly the primary route to making a dramatic feature. Now an unfunded low-budget feature provides another route, where it's very unusual for a woman to direct.

I'll write more about the pipelines, but in the meantime,  to reflect on, a few more statistics from programmes fully or partly funded by the NZFC administering public funds within parameters that include human rights legislation.

The question that most interests me is why women choose to participate in some programmes more than others. Where do we feel most welcome? Why? Which gatekeepers are best at ensuring their programmes attract diverse participants?

And then there's the women producer issue: women producers who aren't also actors, writers and/or directors and editors are strongly represented at every level – what's their role in increasing women directors' and editors' participation, if any?

I'd love to know your questions.

Except where indicated, the stats are my own–


Dramatic features directed by Maori women, in the last 25 years 0%

Dramatic features directed by women from around the world and with female protagonists, screened at the New Zealand International Film Festival 2014 (#nziff, details here) 5%

Production-funded dramatic features with women as protagonists, in the last decade 14%

Women also wrote two-thirds of the feature-length scripts nominated for SWANZ 2014, administered by the NZWG;

Women are more than half of those selected for the NZWG upcoming Showcase event;

In my own research earlier this year, 80% of the scripts written by women who participated had female protagonists.

If you have anything you'd like to ask me, or to tell me, as I research and write, please don't hesitate to let me know, here in the comments, or by email,  by phone, or on social media. (I'd especially love views on how women's funds work in other professions, something I know little about and won't have time to research.)