Jane Campion at #Cannes2014; & A series about Cannes and the Bechdel Test


There have been many reports of Jane Campion's statements at the Cannes press conference for the main jury, where she said, in response to a question about 'inherent sexism'–


There is some inherent sexism in the industry. Thierry Frémaux told us that us only 7% out of the 1,800 films submitted to the Cannes Film Festival were directed by women. He was proud to say that we had 20% in all of the programs. Nevertheless, it feels very undemocratic, and women do notice. Time and time again we don’t get our share of representation. Excuse me gentlemen, but the guys seem to eat all the cake. It’s not that I resent the male filmmakers. I love all of them. But there is something that women are thinking of doing that we don’t get to know enough about. It’s always a surprise when a woman filmmaker does come about.

But, as president of the jury, she's also been interviewed many times, and it seems that every time she's spoken, she's addressed the 'woman question'. Staunchly. Even in her speech on opening night. I've been collecting links here. And she's provided new information, a transparency that's unique to date. For instance, we've never before heard what proportion of films submitted to Cannes were directed by women.

In one interview, with Libération (a French daily newspaper founded in Paris by Jean-Paul Sartre and Serge July in 1973 in the wake of the protest movements of May 1968), Jane Campion reveals that she suggested that the jury be all women. With help from Sue Sullivan – many thanks, Sue! – here's a translation of part of the published interview. We don't know whether the interview was originally in French or whether Libération translated from English, and now we've put it back into English, it's maybe a slightly different English. Whichever, we hope this is accurate.

Have Gilles Jacob and Thierry Frémaux provided you with rules that govern your presidency?

Ah yes, there are, how to say it... (she stands up) a kind of little regulation (she goes to rummage in her handbag and fishes out a folded paper, brings it back to our table, consults it briefly and refolds it). All the rules are made to be broken, I presume, like the fact that we mustn’t award a second Palme d’Or to a director who’s already had one, even though there are examples of this having been done. Someone also explained to me that if it’s difficult to choose between two contenders, it’s better to choose the one whose work will reach the largest audience… It’s an interesting question… (The idea that this isn’t necessarily her view flies into the silence.)

Have you contributed to the jury selection?

I had a conversation about this with Thierry. I mostly left it up to him, with his address book which is far superior to mine, saying to him that he should do what he wished. He asked me “Have you got enemies?” I don’t think so. (laughter) At some point, I suggested that he select a jury entirely of women. He didn’t respond.

Yes, firstly because it would have been easy to find nine distinguished women, respected by everyone in the world of cinema. And it would have been interesting to imagine the contestants for the award asking how their films would be received by a jury of women. That would have been a change, because as a woman you spend your life asking yourself what the men are going to think of you and your work. I mentioned my idea to a male friend and he immediately replied “Oh no, that would be understood as a gender campaign.” That was an interesting response, too. There are sixteen male directors this year; it would have been amusing.

It looks like Jane Campion's sisterhood extends to the other women in the jury too (of course!). Here they are with Thierry Fremaux, on their way to view Alice Rohrwacher's Le Meraviglie (The Wonders), one of the two films by women in competition. 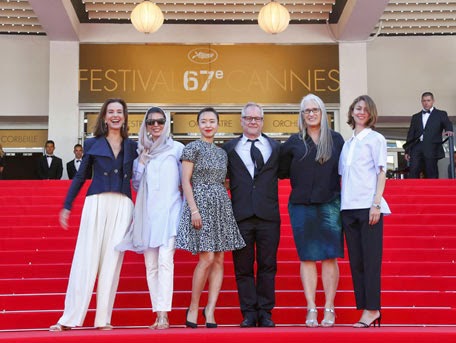 Cannes and the Bechdel Test

Also in Libération, a terrific Bechdel Test series, thanks to Tess Magazine, in partnership with Le Deuxième Regard, WIFT Sweden and Sweden's A-Rating. For next year, I'm going to improve my French!

And finally, I've just seen a report of a new book of interviews with Jane Campion, by Michel Ciment. The photo at the top is of Jane in conversation with Michel on Saturday. This one, of Jane in 1979, taken by John Lethbridge, ends the report. A lovely closing bracket. (And I'll be limping through the text of that report asap, lots more quotes there from this wonderful woman!)