The A-rating for Activists: Interview with Ellen Tejle

Last week in Sweden, four independent cinemas launched an A-rating system. It's for films that pass the Bechdel Test: they include at least two named female characters who talk to each other about something other than men. The ‘A’ stands for ‘Approved’ as well as for ‘Alison’ [Bechdel], who created the test, sometimes called the Mo Movie Measure, in her Dykes to Watch Out For comic strip, in 1985. (See below for Anita Sarkeesian’s classic discussion of the Bechdel Test and a collection of responses to the announcement. Please feel free to add yours in the comments.)

I’m not surprised that this is a Swedish initiative. Sweden probably leads the world in its film gender equity programmes. Sweden’s National Film Agreement contains an equality directive for the Swedish Film Institute, which funds four-fifths of Swedish films: its funding “shall be divided equally between women and men" in the key positions of director, screenwriter and producer (it used to be that the proportion of women and men in key positions be at least 40 percent). The Swedish Film Institute has produced an excellent Towards Gender Equality in the Film Industry flier, aimed at other countries. Sweden has a ‘feminist film fast’ movement, too, led by journalist Wanda Bendjelloul who made the first public attempt to stop watching films made by men.

A group developed the A-rating – people at the four cinemas, all part of the Folkets Hus och Parker/National Association of Peoples Parks and Community Centres;  WIFT Sweden; Rättviseförmedlingen/ The Agency Equalisters. As with the recent French Charte D’Egalité, as an activist I wanted to know how this initiative happened, why it worked in a specific culture, at a particular time. Could this A-rating work outside Sweden? Ellen Tejle, from one of the cinemas, kindly agreed to answer my questions.


Q: How does the certification work? Do filmmakers apply?

Everyone can use it! The A-rating can be used by cinemas, film festivals, newspapers and VOD services... actually anyone who feels the perspective is useful, shocking or inspiring. Its simplicity makes it a very good tool for anyone interested in this issue so we've made available the logo, vignette and stamp for public use. The material is all online. It is important to note that it is not a mark of quality. The Bechdel Test only measures whether a film has two women in it talking to one another about anything other than a man.  The Bechdel Test is a joke, and the A-rating is an ironic way to spread acknowledgement of the fact that we live in a world where women's stories and experiences are not valued in the same way as male stories and experiences.

Q: Is there a high proportion of Bechdel Test films among those being made in Sweden? Are men making them as well as women?

No. Not so many films passed the Bechdel Test in Sweden. 90 percent of the films shown in Sweden last year failed the test. And Sweden’s largest newspaper investigated Sweden’s 30 most popular made films of the last ten years, and 20 of them failed the test. You will have a little higher rate of movies passing the test if they made by are women, but not big. This norm exists for both women and men.

Q: Who benefits from the certification?

Hopefully everybody! The film industry, and also citizens getting an eye-opener and a tool that adds some important perspective to their lives. Can’t really see any big losers in this project. The A-rating is consumer information meant to raise awareness regarding gender bias on the screen by highlighting the films with some female presence. The consumer information is not judging movies that fail the test. Just highlighting those that pass it. Positive intention.

Q: How is the process funded?

We fund it. Our cinemas are run by the national non-profit organization Folkets Hus och Parker, a national organization for community centres, cinemas, people's parks, amusement parks and festivals all over Sweden. The organization is based on participation and voluntary commitment, and we funded the project by ourselves.

Q: What are the group’s intentions for the certificate?

We will start by A-rating movies at our cinemas for at least one year.

Q: Whose idea was it?

We're four Swedish non-profit cinemas that work daily with issues like human rights, democracy, the environment and gender-equality. We do not see any conflict between these concepts and that of entertainment. Quite the contrary – we think they complete and enhance one another. Our goal has always been to show films that have a profound effect on the viewer. That is why we make room for stories from all over the world (not just from Sweden, Britain and the US). We were honoured with an ‘Entrepreneur Cinemas in Europe’ award for our dynamic and innovative approach towards how a cinema should operate. Even though we go to great lengths to make sure our stories represent the whole of society, we've experienced difficulty in finding films shot from female perspectives. When professionals like ourselves can't even get it together we thought it best to do something about it.

Q: Who are The Agency Equalisters?

Equalisters are a growing movement of more than 50,000 people. Here is some info from their website:


Rättviseförmedlingen is called Equalisters in English. Equal for equality, and listers for all the people who contribute to the massive lists that we compile of people who can serve as alternatives to prevailing norms. Equalisters is an equality project aiming to correct the imbalances of representation in media, culture, business and other contexts. We believe that when it comes to including competent women and people from other underrepresented groups, excuses that claim that ’there just weren’t any’, are no longer good enough.


Q:  I was at first surprised to see Women in Film & Television (WIFT) Sweden’s involvement. WIFT chapters tend to avoid association with overtly activist projects. They argue that WIFT International’s objectives preclude their involvement although they could justify it by reference to two of WIFTI’s objectives: to ‘Develop bold international projects and initiatives’ and to ‘Encourage diverse and positive representation of women in screen-based media worldwide’. There’s just one exception I know of, Women in Film Los Angeles’ partnership with the Sundance Institute. Do you know what motivated WIFT Sweden? Does the larger gender equity context in Sweden allow them to act in support of the certificate?

Here's an answer directly from Eva Beling, Chairperson of the Swedish branch of WIFT:


The A-rating helps us to reach out with an important message. Most people would think that the majority of films would pass the Bechtel test, and just simply because of that it is important that WIFT Sweden supports something as specific as the A-rating. As it is today there is an enormous imbalance in whose story and perspective we receive on the cinema screen. By cooperating with developing the A-rating system WIFT Sweden hopes to speed up this process.

If WIFT Sweden's studies and research material (we have published four studies) had been as easily communicated and attractive as the A-rating, a change might already have occurred. WIFT Sweden also believes it is a humorous way to build awareness and hopefully the A-rating will encourage new ways of thinking for both audience and creators of films.

Q: I understand that Anna Serner who heads the Swedish Film Institute has spoken out in support. Has that made a difference?

All supports helps! And we have had a lot during the launching. Anna Serner’s support encourages us, of course, and we are very proud that we in Sweden have such brilliance at the top of Swedish Film Institute. 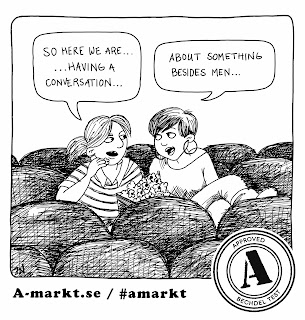 Q: On your site, there’s a warm response from Alison Bechdel. Did you feel that you needed her permission? How did you get it?

We wanted to keep her informed about our idea and did continue to e-mail her updates during our project. The response we got was through e-mailing.

Q: Have you met with any opposition?

It can be hard to get a simple message through. We created the A-rating to stimulate a greater dialogue on gender equality in film today. Instead what people hear is that the A-rating is a seal of feminist approval or a sign of quality. That is NOT what we're saying. We're only saying that there is a minuscule amount of films out there with two women (with names) talking to one another about something other than a man. Recognizing this fact is something we hope has the potential to spark positive change.

Q: One criticism of the A-Rating is that ‘feminist’ or ‘feminist-minded’ films may fail it. And Elizabeth Nolan Brown provides Kelly Reichardt’s Wendy and Lucy as an example of a ‘feminist-minded’ film where the protagonist rarely speaks.  Is there a place for an F-rating for feminist films, perhaps?

We know that the Bechdel Test and A-rating is not enough. We need other tools, discussions and perspectives as well, to help the film industry to become more equal. The A-rating, as a tool, is more like an objective complement to the film's contents, reminding us every day that female stories are underrepresented. Spontaneously, I think it is difficult to have certifications that are subjective like ‘feminist’. But I will cheer everyone who adds action to this movement.

Q: What will happen now? Are you approaching more cinemas to adopt the certificate? Are they approaching you?

Yes. We have number of cinemas that will start to A-rate as we do. Film festivals as well. Great response!

Q: Have you heard of people from outside Sweden planning a similar initiative? What advice would you give them?

Yes, I’m in contact with cinemas, film festivals and film organizations that are all considering if they can start working with A-rating somehow. Looking forward to following this process. We will go to a conference in Athens next week with cinemas from all over Europe, and launching the idea for them. My advice is of course GO FOR IT! It’s so easy do to, and just about positive intention. 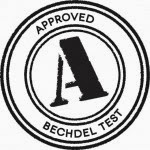 Alison Bechdel herself on the A-rating