November 01, 2012
This week, I'm writing for someone else, about New Zealand women directors. It's a challenge to write 'academically' again and to ensure I'm up to date. Constantly, I find myself asking about details and I've returned to the statistics I developed a few years ago. If there are few women's features made, where in the process are women writers and directors choosing not to participate? What factors in the process hinder or support their participation? And what individuals or organisations are best placed to provide information about the essential details?  I've grown used to the New Zealand Film Commission's (NZFC) lack of gender statistics (in contrast to state funders in Sweden, Australia and, Canada). But The Black List and the New Zealand Writers Guild (NZWG) provide the latest examples of organisations who could help with some details but at the moment do not. The Black List is a commercial enterprise so it has no obligations except to its shareholders. But the NZWG is partially funded by the taxpayer and I think that, like the NZFC, it has a human rights obligation to engage with issues around gender and screenwriting. It's tiny compared to the Writers Guild of America West, which has an discrete Diversity Department  and puts out a Hollywood Writers Report every two years, but it could do more.

1. The Black List
If you're not familiar with The Black List, Franklin Leonard founded it in 2005, as as survey of one hundred film industry development executives. He asked them to name their favorite scripts from that year that hadn't been made into feature films. From those votes he made a list of the most popular screenplays. He's repeated the process each year since and about five hundred voters are now registered. About 60% respond annually, and over two hundred Black List screenplays have become films. In September this year, The Black List launched "a membership site for industry professionals that functions as a real time Black List and screenplay recommendation service." And now, for a fee, screenwriters can upload their scripts to the database, have them evaluated by professional script readers, and – subject to that evaluation and the Black List recommendation algorithm – sent to over a thousand film industry professionals. Brilliant idea! And one that will appeal to me when I next have a script that I want to get out there.

The other day, after writing briefly (Item 6) about the new service I saw Franklin Leonard's post about it, and submitted a comment. 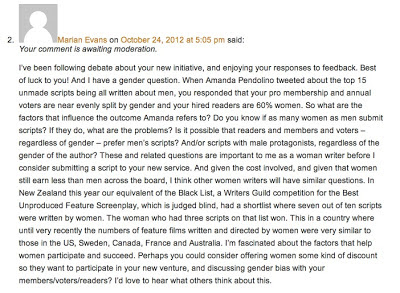 Oops. It was meant to be 'by', not 'about' men, though 'by and about' would have done it, too! And then I waited for a response. The comment remained 'awaiting moderation', so a few days later I tweeted and got a reply. 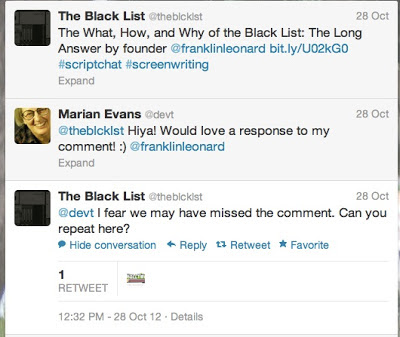 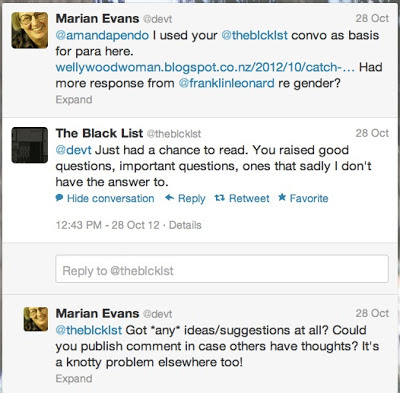 And that was it. My comment remains 'awaiting moderation'.

And then I found out that Monday's (NZT) #scriptchat was to feature Franklin Leonard and The Black List. Wanted to be there, but I had to go to a funeral, of David Carson-Parker, the beautiful generous man who funds the David Carson-Parker Scriptwriting Award, which I won a while back when it was still the Embassy Theatre Trust Scriptwriting Award. How could I not go? The award opened doors for me and David also gave me some very useful mentoring not long ago. And I'm glad I went. It was the first funeral I've been to where the congregation gave a standing ovation to the man they'd come together to mourn, commemorate and celebrate. I wanted to stamp my feet and whistle, too.

So. I sent the lovely Jeanne V Bowerman a tweet, asking her to ask Franklin a gender question. And with her usual awesomeness she did. 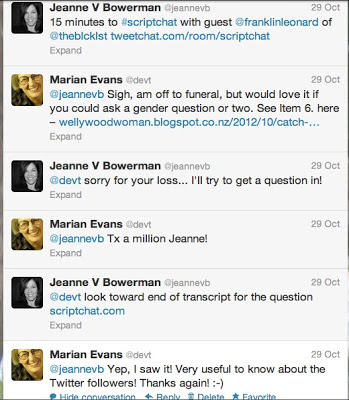 When I went online to the #scriptchat transcript, this is what I found. Towards the end of the session, there was Jeanne's question. Thanks, Jeanne!

And then Franklin added something new.

By sharing his Twitter gender split does he hint that more men than women are submitting their scripts to The Black List's service? I have no idea, but because he has so much gender info about various elements associated with The Black List enterprises, I suspect that he also knows the proportion of women's scripts among those submitted. I wish he'd share, and we could have a full conversation about what might be holding women back and what might attract them.

And then there was a bonus, a gender conversation among some women on #scriptchat. Jeanne started it!

And others joined in.

Could it be that women are more likely to compete when they work as a group? This reminded me of a 48 Hours veteran speaking in a podcast earlier this year about the single time she competed with an all-women team and how it was the best ever fun.

I hope that Franklin will respond in more detail sometime. Waiting with a smile! (I imagine that he's incredibly busy and facing  a lot of issues with his expansion.)  But I've given up on the New Zealand Writers Guild.

2. The New Zealand Writers Guild & the Script Writer Awards of New Zealand
As I explained in the comment for Franklin, the NZWG runs the Script Writer Awards of New Zealand (SWANZ). And this year they had a Best Unproduced Script category, which  nicely mirrors The Black List, except that writers enter their own work,instead of having it nominated by development executives. The scripts are judged blind, no need for women to wonder whether we should go for a pseudonym if we don't have a gender-ambiguous name! And it turned out that women wrote seven of the ten final scripts and two of them contributed more than one: Casey Whelan (2!!); Jackie Van Beek; Linda Niccol(3!!!); and Maya Hammersal. (Happy to name them, in case you're looking for a good script ;) ) Of course I had questions. Were any of these scripts on the way to production? Have producers and investors, who don't read 'blind', rejected these scripts for gender-related reasons? But most of all, how many women submitted their scripts? Does the 70%/30% gender split in the finalists reflect the gender split in submissions? And if so, what's attracting women so strongly to this New Zealand initiative?

So I asked the NZWG (of which I'm a member, but alas not in good standing as I haven't paid this year's sub – due in June – yet!) if they could tell me about the gender split of the applicants.  No, my contact said, because the competition is judged blind. But, I said, you must have had a list somewhere that linked scripts to names because how otherwise would you identify the finalists and winner? No response. And I don't think 'waiting with a smile' will help. Sigh.

3. Girls On Film
For a useful model of a project that supports women screenwriters' participation, check out this fantastic report on an excellent competition run by the London Screenwriters Festival, Girls on Film. Congratulations to all concerned. Girls on Film, endorsed by Women In Film & TV, Women In Hollywood and The Underwire Festival, was launched to find great genre pieces with female protagonists, antagonists and/or secondary characters. Team GoF didn't want drama pieces. Instead, it asked for the types of story that tend to have male central characters: Action/Adventures, Comedies, Science Fiction, Thrillers and so on. The scripts Team GoF felt were strongest were passed on to to the project's partners which included Big Talk Pictures, Ealing Studios, Slingshot Studios, Linda Seifert Management, The Dench Arnold Agency, MBA Literary Agents and many more. And it'll be back again soon, with a new website etc! I love the London Screenwriters Festival's transparency, evident in its 50 Kisses competition, too. (Though of course a breakdown of competitors by gender/role would be awesome.)

4. Nicole Beckwith, Nicholl Screenwriting Fellow 2012
Meanwhile this year's Nicholl Screenwriting Fellows have been announced and one of the five new Fellows is a woman, Nikole Beckwith, from Brooklyn, NY (hope she's OK after Sandy). Many congratulations to her! That's Nikole, at the top of this post. She makes comics and writes plays for the theatre, too. Her screenplay's called Stockholm, Pennsylvania and I hope it's been snapped up and will appear on our screens before too long:


19 years after her kidnapping, Leia is returned home to her parents where she discovers her name is Leanne and her birthday isn't in March. As Leia longs for the life she remembers and the man who made her who she is, Leia's mother works harder than ever to get her daughter back by any means necessary.

I'd like to know how many women applied for a Nicholl Screenwriting Fellowship in 2012. Does the 20%/80% gender split in the Fellows mirror the gender split in the applications? But would  the Academy of Motion Pictures Arts & Sciences tell me? It'd be wonderful to know, especially as the most optimistic global stats available show that women write less than 25% of produced feature films.* Again, is our representation so small because we don't compete? If women writers aren't participating in The Black List, and aren't applying for Nicholl Screenwriting Fellowships, why why why?

But I know you'll understand if I don't write to the Academy this year, given my experiences with The Black List and the NZWG. Maybe next year. For now, back to my 4000 words on New Zealand women directors.

*To give just one example, Martha Lauzen researched a selection of United States film festivals between August 2011-August 2012 for Independent Women: Behind-the-Scenes Representation on Festival Films  and compared her findings with those from her similar survey in 2008-2009. The percentage of women writers increased from 15%-21%.

PS Have just discovered from the Nicholl Facebook page that 'about 28% of 2012 entries were submitted by women. Just over 50% of the first and quarterfinal round readers were women. Three of the 10 finalist scripts were written by women'. I could have asked, because they have an answer!

PPS 19 December
After I had the info from the Nicholl Facebook page, The Black List and I had another short interchange, as I tried to understand the parameters of what The Black List's service does. 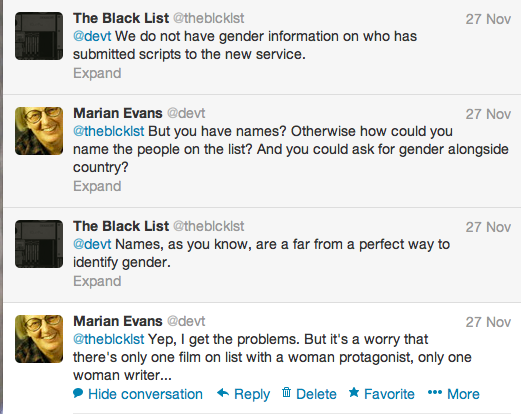 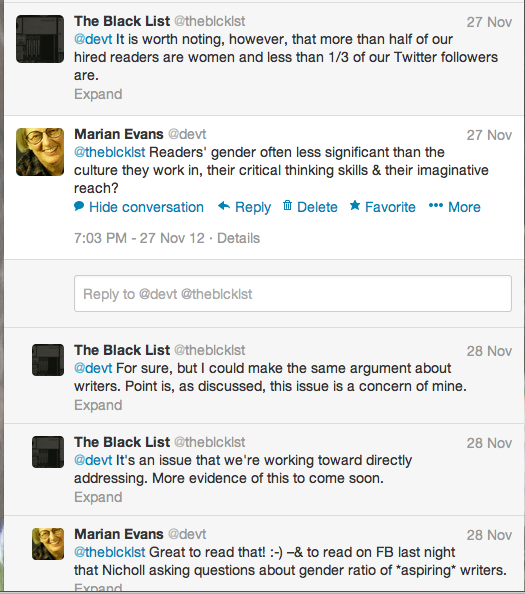 I'm looking forward to seeing what the Black List has in store to address the gender concerns, but I think that the Nicholl is the most important organisation to follow at the moment, because they're looking at the wider issues of gender and aspiration, as well as the genders of applicants for fellowships. Everything I know tells me that women want to write screenplays as much as men do; they – we – are strongly represented in scriptwriting education, for instance.

Yesterday The Black List 2012 was announced (and it includes Nikole Beckwith's Nicholl Fellowship script). You can see the list of women-written scripts here on Women & Hollywood (where they're looking for info from women who've used the Black List service): seven out of seventy-eight, or 14%. The Hit List was also released, of the top spec scripts to the year ending 30 November: women wrote nine of seventy-seven scripts, or almost 12%. It's worth looking at the full Black List if you're interested in women as protagonists, too. There are some ambiguous details, so if I wasn't sure, I gave a project the benefit of the doubt and included it as one with a woman protagonist. This brought the numbers to just over 19%.