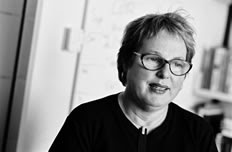 Associate Professor Deborah Jones of the Victoria Management School was my supervisor before it became possible to do a Creative Writing PhD and I transferred to the International Institute of Modern Letters. She was great, and I've been longing to know more about her Glamour & Grind: New Creative Workers research (with Professor Judith Pringle, and with Ella Henry and Dr Rachel Wolfgramm. Funded by the prestigious Marsden Fund, Glamour & Grind is a just-completed three-year case study which researched the life histories of crews in the New Zealand film industry, in order to develop theories about the identities and careers of 'new' creative workers.  I wish I'd asked Deborah about who she perceived as 'old' creative workers, and speculate—after editing the recording—that she may mean those who in the past were employees, rather than contract workers, at an organisation like the National Film Unit.  I loved hearing what Deborah had to say in this podcast: about the similarities and differences between work in the film industry and other kinds of work, about networks, gender, family responsibilities, the role of the homosocial in work environments and non-unionised labour.
Download podcast
I'm intrigued by the gap I perceive between the working lives of those Deborah and her co-researchers studied and my experience and observations of how artists and writers live. This interest isn't new. Creative industries research studies the places where art and business meet. It focuses on organisations, industrial issues, and 'careers', not individual arts practice; when I did a literature search while Deborah was my supervisor, I found it almost impossible to relate what I found to the daily realities for the artists I know and hear about. I resolved this cognitive dissonance by using autoethnography (the study of self in culture) as my conceptual framework.  Now I want to try again to express what this 'gap' means to me, after Kirstin Marcon referred to David Mamet's view of artists' reality in her interview the other day (thanks, Kirstin):


Artists don’t wonder, 'What is it good for?' They aren’t driven to 'create art', or to 'help people', or to 'make money'. They are driven to lessen the burden of the unbearable disparity between their conscious and unconscious minds, and so to achieve peace.

Arguably this drive places artists outside both 'creative' and 'industry'. Artists who have it (and some may not) are likely to engage with creative industries organisations only if they can help them get their own images (moving or still) into the frame or onto the page. Everything else in these artists' work world is subservient to that, even if, as for Kirstin Marcon, it means years of forgoing income.

There are artists who choose to work as much as possible for organisations that they do not own because they perceive that these provide specific opportunities and—maybe—some security. This is perhaps especially true if they are ensemble musicians and performers or want to support other artists to tell their stories. And in the 'new' environment of the internet more and more artists are becoming entrepreneurs: they develop direct relationships with viewers and readers—which sometimes provide an income. But many other artists, of all ages, continue to cobble a living together from a range of activities which may or may not include dipping in and out of the diverse organisations that make up the creative industries (and when they're active in the creative industries the conditions they work in and their behaviours will mirror that culture?).

For some artists, choices to hire themselves out to a creative industry organisation may depend on how far that work will advance their own work. Others resist involvement with creative industries organisations: they see the organisations and the individuals within them as problematic because they benefit directly and indirectly from individual artists’ work much more than the artists do themselves: producers, public relations workers, publishers, gallery owners, agents, distributors and academics, bureaucrats in state-funded arts agencies and those engaged with their governance, investors. Alternatives to consistent engagement with creative industries are varied: some income from making their own work (which may or may not involve creative industry engagement); support from family; state support through grants or benefits; labouring or other regular work outside 'the arts'. Teaching can be attractive because it provides regular and reasonably paid employment which combines servicing the creative industries—through training potential workers—with being an artist, through its research component. (From anecdotes and observation I think that teaching works better for men than for women. Men who teach appear better able to sustain and develop their art practices, perhaps because women who teach tend to be more conscientious with both the teaching and administration; I think this may be because women traditionally prioritise nurture of the next generation before their commitment to their own work.)

So, if you have a child who looks like becoming an artist, hope that the child is male. And, if she is a girl, hope she's a musician and/or performer, not someone who wants to make and frame images or tell stories! 'Other artists' defined as 'teachers and administrators' (not sure how an administrator is an artist!), 88% of whom were salaried, earned 109% of the median income for all New Zealanders in paid employment—no wonder the teaching option is particularly attractive for male artists with family responsibilities, though probably not for women who want to prioritise their art practice.

Comments from artists who took part in this research included:


Money is one of the main problems writers have. Another problem is getting things published. Constant rejection takes up a large portion of your life and you don’t earn a thing. You lose faith in yourself and you have to live virtually on no income. Support from my partner keeps me going financially. (a film artist)

If you have a child who is an artist, hope that you can support that child more than usual, or that s/he falls in love with someone who can subsidise the work!

Who would choose to take on this kind of work life, unless 'driven to lessen the burden of the unbearable disparity between their conscious and unconscious minds'? And given the challenges outlined by Deborah, it would be remarkable if any of us saw ongoing advantages in engaging with the communities she studied, unless they provide something that will help us realise our own images in the frame, our own stories being told.

LINK
Portrait of the Artist/Te Whakaahua O Te Tangata Pukenga (a big thank you to Matt Allen for making sure this is still available online). Unfortunately, according to Creative New Zealand's Arts Policy and Strategy Team, there are no plans to update or to repeat this research.