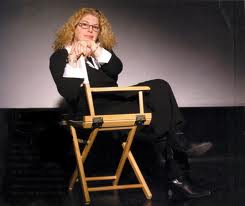 Women Make Movies (WMM) is unique, as a film distributor, as a supporter of women filmmakers and as an activist institution. Forty years old this year, founded in New York around the same time as Ms magazine and Heresies, a women's art collective which produced an influential magazine. Although WMM has changed over the years, feminists have always retained ownership. Unlike Heresies, it's kept going as an organisation.

WMM is central to many discussions of women's filmmaking around the globe. And during a conversation with an Asia-based filmmaker trying to find distribution for her feature, I realised that there were things I didn't know about WMM. So I asked Debra Zimmerman, the Executive Director, if I could interview her.

Debra's worked for WMM for thirty years. I think she and the organisation are global treasures for women, with an astonishing record, astonishing reach, and extraordinary knowledge base. And it was lovely to see that Chicken & Egg Pictures* gave Debra their Good Egg Award at Sundance the other day. Debra didn't want to email an interview. So I decided to interview her by phone and turn the interview into a podcast. Joined Wellington Access Radio down the road and started to think about a podcast series.

There's a downside to having "Why not? Let's give it a burl--" as a default setting: I sometimes make mistakes I can't correct. Access Radio's very busy as well as very welcoming and supportive (thanks a million, Laura and Nik!); it offers only a very short training and expects users to be autonomous very fast. I fell in love with the live chat, the sliders on the board, then the marks on the timeline, the way the sound waves ebb and flow, little details like different shapes of my "um" and Debra's "um", fell in love with with the potential of radio. But I was a dork when I didn't think to create a  'edit' file from the master file, and then had to chop a couple of things which I could not rescue. I'm very grateful to Nik for his work in salvaging some other things. The sound is better in the second half I think, so if you want the gold that Debra offers please persevere! (If enough of you say it's unlistenable, I'll transcribe the interview later on.)

Below, links to organisations, people and films that Debra mentions. And the good news is, she enjoyed the chat and would like to chat again. So if you have unanswered questions once you've listened, please don't hesitate to let me know.

What's on this podcast? WMM's history, and how Debra became involved; what WMM does— distribution and how they select films; support for filmmakers seeking fiscal sponsorship and WMM's new alliance with Indiegogo; Debra's work with film festivals and the role of women's film festivals; Debra's advice to women filmmakers, and three new films that excite her. Many many thanks, Debra, for being willing to give this a go and for sharing so generously.

I plan a podcast every fortnight, Monday morning New Zealand time, starting next Monday with Pietra Brettkelly, director of Maori Boy Genius, which premieres in Berlin that day. My warm thanks to the Development Project friends who make the podcasts possible.

*Chicken & Egg Pictures "is a hybrid film fund and non-profit production company dedicated to supporting women filmmakers who are as passionate about the craft of storytelling as they are about the social justice, environmental and human rights issues they’re embracing, translating and exploring on film. We match strategically timed financial support with rigorous, respectful and dynamic mentorship, creative collaboration and community-building to nurture women filmmakers whose diverse voices represent a range of lived experience and realities that have the power to change the world as we know it." News of their latest grant recipients is here.