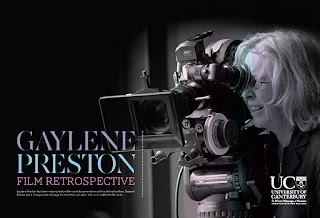 The catalogue also includes a filmography I made as part of my archival work for Gaylene, with a wee reference to Corinn Columpar and Sophie Mayer's There She Goes: Feminist Filmmaking and Beyond, which helped me articulate how Gaylene can be understood as a feminist auteur. And I'm thrilled that by accident the filmography associates me with Gender & Women's Studies at Victoria University of Wellington, where the lovely lecturers made space for the work on Gaylene's archive, waaaay back in 2003: it was such a supportive and generous and life-and-work enhancing place, thanks to Alison Laurie, Lesley Hall, Lorna Kanavatoa and Prue Hyman. And it's so sad that it's no longer there.

You can order your very own copy of the catalogue for only NZ$20: from Mary Wiles: mary.wiles[at]canterbury.ac.nz, or from Gaylene herself: the1[at]gaylenepreston.com.

There's a rumour that the retrospective may reach Auckland. I wish it could travel outside New Zealand as well.

The finalists for the IDA Documentary Awards have been announced. It's wonderful to see that Barbara Hammer's Maya Deren's Sink, has been nominated. Barbara's life and work have inspired a generation of queer, feminist, and avant-garde artists and filmmakers, and this interview, courtesy Museum of Modern Art, New York, illustrates just how inspiring she is. 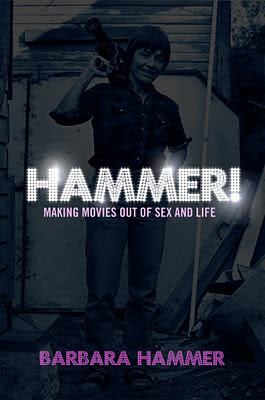 And, from a generation that benefits from Gaylene's and Barbara's hard work on behalf of women filmmakers, it's great to see New Zealand's Briar March's Smoke Songs (What do you get when you mix Navajo culture, politics, and punk-rock? The answer: Blackfire; a Native American family band with a message) in the IDA Documentary Awards nominations as well. Smoke Songs has been nominated for the David L. Wolper Student Documentary Award. This award recognises exceptional achievement in non-fiction film and video production at the university level and brings greater public and industry awareness to the work of students in the documentary field. I can't find a Smoke Songs trailer to include, or even an image, but will add one when when I can.