At the recent Mumbai Film Festival (MAMI), women wrote and directed six of the fourteen films competing for its major competition for first-time feature makers. And Satyen Bordoloi wrote an article, It’s Raining Women Filmmakers in Mami This Year.* I questioned him about the MAMI article. Last year, I said, MAMI had an all-women jury headed by Jane Campion. The people who run this festival must be pro-women, that’s wonderful. No, he said. Until he mentioned it, the organizers didn’t even realise that there were so many women’s films. Rashid Irani, senior film critic and a selection committee member said to Satyen:

When I’m talking to you, I realize that one of the most unprecedented things for any festival is that in the competition we have 6 debut women filmmakers...And each one of them is such a stunning debut that you have to see it to believe it.

They’d just chosen the best films. That’s all. I continued to argue with Satyen. Women’s films are often among the best, I said, but not selected, because women and men tend to promote men’s work more strongly when they advise decision-makers and advocate for inclusion. I believe that a subliminal change in attitude among all concerned can cause this kind of shift. Maybe more women made submissions because of the all-women jury last year, which told them women are welcome in Mumbai? Maybe advocates and advisers felt comfortable promoting women’s films, for the same reason? Satyen wasn’t convinced. And there were also more films directed by women in competition at Cannes this year, so maybe women now more easily find the resources to make good films? (From what I hear, I don't think so.)  Anyway, I turned to the films.

Here they are: Julia Leigh’s Sleeping Beauty from Australia (also in competition at Cannes), Historias Que So Existem Quando Lembradas/ History Only Exists When Remembered by Julia Murat from Brazil/Argentina (“a masterful fable of memory and time” according to Satyen), My Little Princess by Eva Ionesco from France, The Dead Sea/Sengadal by Leena Manimekalai from India, The Mirror Never Lies by Kamila Andini from Indonesia and She Monkeys by Lisa Aschan from Sweden. My Little Princess, about a love-hate relationship between a mother and her daughter, scooped the award, and awards for best director and best actress.
As I watched the trailers and some YouTube interviews with the directors, and read other interviews, including two of Satyen’s articles about the films and their directors, I had a few more thoughts. It’s great to have a diverse group of women’s features together within a general festival, instead of one or two as exceptions, because it’s possible to begin to speculate about factors that may have contributed to their completion and quality, beyond the talent and determination of their makers.
There’s a common element in two of the filmmakers’ life stories: Kamila Andini and Julia Murat come from film-making families. Kamila Andini’s father is the Indonesian director Garin Nugroho. She is only twenty-six and The Mirror Never Lies centres on Pakis, a 12-year-old girl whose father is lost at sea, and her difficult relationship with her mother Tayung, who keeps her face permanently masked in white lotion.  Julia Murat’s mother is Lucia Murat, the film-maker, journalist, and activist against the dictatorship in Brazil between 1968-79.  (Other women filmmakers whose story reflects the possible influence of family tradition are the Iranian Makhmalbaf sisters, Samira and Hana, trained by their father Mohsen Makmalbafa, and discussed by Kathy Wu here).
Julia Leigh had a slightly different set of resources. She's a successful novelist. And she’s from Australia. There, Dr Ruth Harley is Screen Australia’s CEO and a strong advocate for gender equity: in its last round of feature development, 41% of Screen Australia's investment went into projects that women wrote. As well, the ever-generous Jane Campion was Julia Leigh's mentor and advocate. Lisa Aschan first came to attention with Fuck the Rapist, a collection of fictional ads for spiked tampons designed to protect against rape. She’s worked in film, television and theatre. Eva Ionesco is a well-known actor, and I believe that women who move from acting to writing and directing arrive with all kinds of inbuilt strengths.
I love it that Sleeping Beauty, My Little Princess, The Mirror Never Lies, She Monkeys and History Only Exists When Remembered all centre on women/girls and gender.
It’s also noticeable that two of these films come from Asian filmmakers. Satyen writes, in an article about Kamila Andini and The Mirror Never Lies:


At MAMI this year, considering the films in competition, there is perceptible difference between films from developed worlds like Europe, North America and Australia and those from developing worlds. Whereas the former have intellectual control, the ones from Latin America and Asia  carry a spiritual strength rarely achieved in cinema. Seeing and putting these films into perspective, it is evident, that the hope of cinema lies in the latter.

Is it inevitable that a festival that includes films with spiritual strength to includes a high proportion of women-directed films, as well as filmmakers from Latin America and Asia (and perhaps from the Pacific, if I think about the new Samoan/New Zealand film, Tusi Tamasese's O Le Tulafale/ The Orator which I saw last night and which—directed by  a man—arguably has a spiritual power like the one that Satyen discusses)?

If you feel frustrated by the lack of female directors, try looking outside of Hollywood and Western cinema. Just look at what the female filmmakers in Iran are capable of achieving, in an environment that is infinitely more hostile and difficult then here in the West. Some of the most exciting, challenging and powerful women filmmakers in the world today can be found working in the most surprising of locations, speaking the most curious of languages, fastidiously producing their own extraordinary visions of the world. Go and seek them out, because they need your support.

I agree with her. Take Leena Manimekalai. On Facebook she lists some of her many film-making achievements. She’s extraordinarily prolific, describes herself  as an artist, film-maker, poet and actor, and lists her interests in human rights, feminism, travel, reading, music, cinema, creative writing, graffiti. But I’d never seen anything written about her until I read this article on her blog, and then an interview. 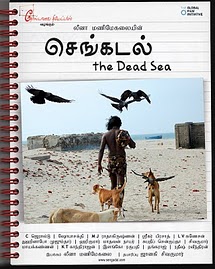 Sengadal/The Dead Sea is her first feature after nine documentaries, and she had an extraordinary battle with the censors before it was released. Read about it here, where she says “Censorship [of various kinds] feels like it is mutilating my organs”. And here she is on Twitter.
Leena Manimekalai also made the doco Goddesses about

...the lives of three women; Lakshmi, a professional funeral singer and canny businesswoman; Krishnaveni, a grave digger who is given the abysmal task of taking unclaimed bodies in whatever state and burying them with her own bare hands; and sea-going fisherwoman, Sethuraku, who was given a man’s profession by her uncle in order to survive and support her family. These women are incredible: hilarious, cunning and strong. They each display power in their own self awareness and assertiveness.

She's so staunch: speaking about Sengadal, she said: “I will stand with my people…in their fight for Justice.” Her next feature will be Passport, about the arduous and tortuous passage of illegal refugees which force them to travel in material and ideological conditions similar to those of times of slavery.


Many thanks to Satyen and to MAMI, for opening my eyes and heart to this group of filmmakers, as women whose work I can continue to follow.

(I really enjoyed these interviews about My Little Princess, and the clip includes most of the trailer.)


November 3: Sengadal has just won the Network of Asian Women's Film Festival (NAWFF) Award for 2011, which recognises and promotes talented women filmmakers in Asia. A special jury comprising representatives from Women's International Film Festivals in Korea, Japan, India and Taiwan, met in Tokyo to select the winner. A total of 5 films drawn from Korea, Japan, Taiwan, Israel and India competed for the NAWFF award. Sengadal was highly commended as a bold and brave film that sensitively portrayed the plight of the fisher folk in Dhanushkodi, caught as they were in the interstices of a long and difficult ethnic conflict in Sri Lanka between the Sinhalese and Tamil people. With live footage and interviews, the film was appreciated as a stellar piece of work by a young and talented filmmaker.

*Satyen is consistently alert to gender issues in film-making, and I originally found him through this article about women filmmakers in Sweden.