July 15, 2010
Erica Duthie and I are making Development-the-movie as a performance piece, an extension of our individual public art practices. Based in Wellywood, we want to contribute to a future where New Zealand women write and direct 50% of all our feature films. One element of this is to talk and write about the NZFC’s investment in women, as the state film fund with a dismal record in funding women's features and investing in women filmmakers generally. Another is to test an alternative and  sustainable feature film-making structure based on Women Make Movies’ idea of a charitable umbrella for funding, and Sally Potter’s practice on The Gold Diggers of paying everyone the same daily rate. If this works for Development-the-movie, it will we hope also work for other women’s feature projects. So, as we work towards our $150,000 goal, we’re trying everything except the NZFC, every likely and unlikely source we can think of.


Often this process means that we are the audience. When people respond to us as we seek and offer support, and we watch and listen, sometimes what we see and hear—or don’t see and hear—transforms our performance.
This happens here in New Zealand on the telephone and in-the-flesh, and as we participate in a strong global community in the blogsphere, on Twitter, on Facebook, in emails and their attachments. This community works hard towards increasing women’s participation in feature filmmaking. Like us, the people in it long for more films that have women as central characters and pass the Bechdel Test. They acknowledge that women often write screenplays that use structures other than the single protagonist’s story. They know that decision-makers are often biased towards filmmakers who are white men and fail to take into account the realities of women as audiences. They also know that there’s a glut of feature films, that the various screen media are converging, that film piracy is rife, and that all this has changed potential sources of income—like theatrical distribution—forever. And individuals respond to this reality in creative ways that inspire us. For instance, there was a lovely post on Facebook recently, from Campbell X at Blackmanvision. She wrote: “I think one has to follow one's instincts and treat a film as a friend. And think who would I like to introduce this friend to”. That gave us a new perspective on Development, and how we will introduce it to this community, made up of lots of overlapping communities within and outside New Zealand: our best-loved present and future audience, which informs and transforms our performance, every day.
One big change is in the way we work. Erica and I are used to performing quickly and efficiently. Sometimes it’s frustrating that we cannot maintain our momentum. We’ve come to understand, first hand, why filmmakers talk about having to be relentless, ruthless, obsessive, more than tenacious. But we also feel strong affinity with this statement made many years ago by painter, poet, and filmmaker Joanna Margaret Paul (1946-2003):

As a woman painting is not a job, not even a vocation. It is part of life, subject to the strains, and joys, of domestic life. I cannot paint unless the house is in order. Unless I paint I don't function well in my domestic roles. Each thing is important. The idea that one sacrifices other values for art is alien to me, and I think to all women whose calling it is to do and be many things. To concentrate all meaning and all energy in a work of art is to leave life dry and banal. I don't wish to separate the significant and everyday actions but to bring them as close as possible together. It is natural for women to do this; their exercise and their training and their artistry is in daily living. Painting for me as a woman is an ordinary act—about the great meaning in ordinary things. Anonymity pattern utility quietness relatedness.

We don’t want to sacrifice our other values to make Development. Lorraine Rowlands’ thesis (see sidebar) demonstrates to us, as audience, that the social and health costs of the New Zealand film industry are significant. I learned first hand during our January shoot how easily I could contribute to those costs through being relentless. So we’re learning to temper our performance and our frustration through welcoming the slowness of this process, and embracing all that we can learn from it about the differences between working with tenacity and working obsessively. Maybe there’s a particular kind of ‘slow film’ process that suits many women for whom ‘each thing is important’.
Sometimes, being an audience can affirm us. This week, as audience and performers, we were delighted when Women In Film & Television (WIFT NZ) invited its members to vote for our project in the People’s Choice section of the AMP scholarship programme. Thank you WIFT NZ. And thank you to the people who’ve voted. (If you haven’t already voted and would like to, you can do so here). And when Lydia Wevers interviewed me as part of the Institute of Modern Letters’ Writers On Monday programme at the marae at Te Papa Museum of New Zealand, as an appreciative audience for Lydia’s sharp questions I felt both impressed and affirmed by her preparation and understanding, and sometimes surprised. Lydia’s questions, and the audience’s questions—including Erica’s—helped me move my ideas forward and to take action, to perform better. Thank you to everyone there. 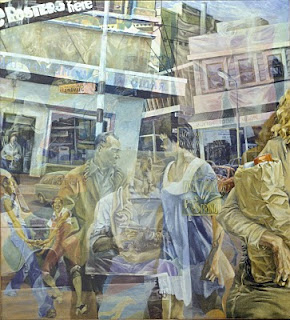 Bill MacKay Poster Shop 2 oil on canvas 140x140cm
Some of Lydia’s questions were about my history, and I had to think back. Afterwards, I remembered this painting. It comes from Bill MacKay’s Wellington street series, which has influenced Development-the-movie in many ways. (The slide I copied was old and the colours aren’t quite right.) Here, clutching a bag of groceries, I’m the ‘model’, a performer, the painter’s audience, half out of the frame; and an audience for passersby. The painter’s primary focus appears to be on the poster shop window (on the corner of Cuba and Vivian Streets) and the posters real and imagined inside; the imagined posters are highly political. But the painting was made when I was moving outside Bill’s frame to join women artists, to become their audience rather than his, and myself a performance artist. When I look at this image now I think, O Bill. Did you place me like that because I was half out of your domestic framework or because you wanted me half out of it? Or was it nothing personal at all? Bill was reading John Berger—as always—at this time, and this painting followed another painting in the series (below) where June Salmond is much more present on her edge of the frame. 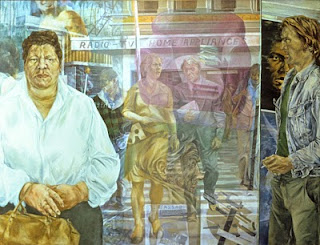 Bill MacKay Poster Shop 1 oil on canvas 126x169cm
June appears to be a different kind of audience, quietly challenging Bill-the-painter, who not long after making these paintings took our children to Ruatoki, to illustrate Maori language picture books for a small printing press attached to the school there. I joined them intermittently, as I worked at Wellington’s Women’s Gallery, in Harris Street where the central police station is now, and later at 323 Willis Street. The street series was over.
The next year—almost thirty years ago—I designed and helped make a big mural. Roma Potiki and I had attempted to organise a national tour of the Matariki group of women poets. Until then, there had never been a women poets’ national tour. One state funding agency agreed to fund the project if the other one would match the funds. The second agency refused the funding. In those days, many women writers also struggled to find publishers. And when I look at this image I think O, hello! to my much younger self, who then felt the same about women writers for the page and performance as I feel now for women writers of feature films. When those writers sang, I imagined I could sing. When they flew up against a patriarchal wall and were bruised or broken, and they wept, I imagined that other women wept with them and with me. Now, when women filmmakers fly up against patriarchal walls, and tell me about it, I sometimes weep again. 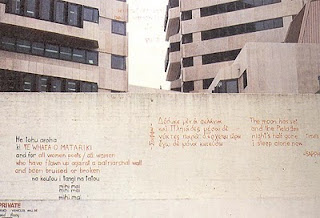 But it was important, then as now, to move from grief to action. For me as a performer, working at the Women’s Gallery was very similar to working on Development. We supported women artists and writers to tell and sell their stories, under a charitable funding umbrella. We organised many thematic art exhibitions including Mothers—an exhibition and associated programme about being a mother and being a daughter—which travelled round New Zealand public galleries and to Sydney. We became publishers-of-last-resort for writers Heather McPherson (A figurehead: A face), J C Sturm (The house of the talking cat), Keri Hulme (the bone people—Keri, who was to have been one of the Matariki poets, sent me the manuscript to read after the tour failed to get funding). All these books sold out. We sold many art works too, connecting artists and writers to audiences, readers and viewers through readings, workshops and seminars. Later, Bridie Lonie and Tilly Lloyd and I produced A Women's Picture Book: 25 Women Artists from Aotearoa New Zealand.

This week, I read the latest NZFC newsletter. It recorded its recent funding decisions. The Board offered two films written and to be directed by men unspecified amounts of conditional production funding, probably well over $1m each. Eleven projects were offered development funds totalling $242,700. Ten of these were projects written by men, some with male directors attached. These projects received $23,770 on average. A woman wrote one project, Little Dragon, the wonderful Lynda Chanwai-Earle, whose play HEAT, about two people and a penguin in Antarctica, has received enthusiastic reviews this week as it starts its national tour in Auckland. Lynda’s also Development’s Frederique, so I’m specially delighted by this decision. Except for one thing. As the only project with a woman as sole writer, Little Dragon received $5,000, 2% of the NZFC’s investment in development in this round. If I add another project with a mixed gender writing team, Paul and Justine Simei-Barton's Fresh As, which received $20,000 and which Justine will direct, the percentage rises to 10%. It’s now over two years since the NZFC acknowledged it had a gender problem. When oh when is it going to address the problem? Will the Peter Jackson/ David Court NZFC review, recently released, make a difference?
Part 2 to follow, asap.
Latest Development-the-movie news
International Institute of Modern Letters Writers on Mondays programme The Marae, Level 4, Te Papa, Cable Street Wellington Mondays 12.15-1.15pm.