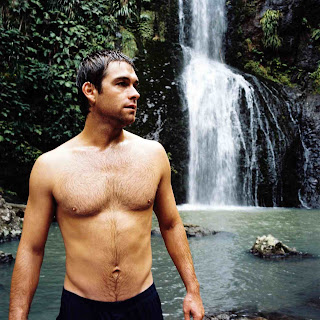 above: Antony Starr as John


After The Waterfall is the only New Zealand feature in the New Zealand International Film Festival that a woman—Simone Horrocks—has written and directed. It premiered in Beijing earlier this month, as part of the 5th New Zealand Film Festival in the People’s Republic of China. Here's Simone speaking at the premiere. 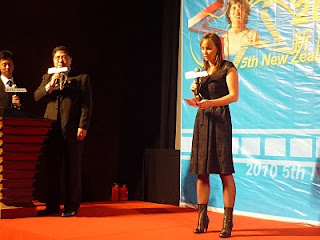 Simone first attracted international attention when she was a semi-finalist for the prestigious Sundance Institute/NHK Filmmaker's Award in 2001. She has written and directed several short films, notably Spindrift, winner of the Best Panorama Short Film award at the Berlin Film Festival, and New Dawn, commissioned by the Edinburgh Film Festival to mark the launch of UK Film Four's Lab. I knew almost nothing about her. So I peppered her with emailed questions. And was truly delighted with her generous responses. 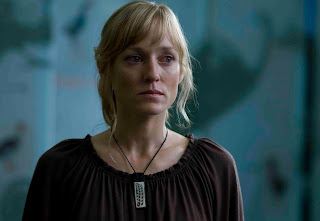 
Q: The director of photography was Jac Fitzgerald, for whom it was also a first feature. You’ve said “Jac really understood the story, and embraced the importance of putting the actors at the heart of our process.  We were committed to working in whatever weather we were sent, and as always in Auckland this meant dealing with sudden and frequent changes.  We had a tight schedule, and it was a tough shoot for Jac and her team, but she did a great job.” I love the photos with you and Jac. What made you choose her? What other work has she done? 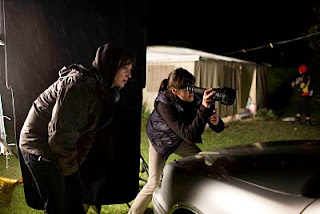 A:  For a long time I had been talking to Adam Clark who works with Taika Waititi, but Boy got funding around the same time as we did, and in the end our shoots overlapped, so he wasn’t able to do it.  I wanted to find someone else who was (what I call) a ‘storytelling cameraperson’, in other words, someone who was interested in telling the story in a visual way, rather than just making it look pretty.  I knew that this film was all about faces, and that it would live or die by its performances, so it was also important to me that the person we chose would be comfortable with a shooting-style that was performance-led, and a good camera operator.  I watched lots of films, and lots of short films, and in the end what drew me to Jac was that after each of her short films (and she has shot quite a few) I could close my eyes and remember the story as a series of images.  Jac had done a mixture of commercials and shorts.  Her work was visually inventive, and she was passionate about the script.  We met, and made connections very quickly.   As Trevor said, “It was like she’d downloaded our brains.”  She also came recommended by Kirsty Cameron (our Costume Designer, and a director in her own right), and that meant a lot. 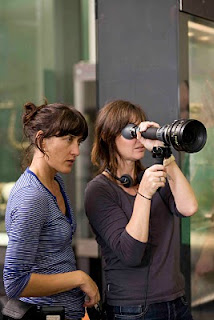 Q: What were the pleasures and difficulties of the shoot and the post-production?
A:  I can honestly say I loved every minute of making this film, and it wasn’t without struggle, but I was in heaven every single minute.   It was a long time coming for me, and I just wanted to come out of it knowing I had no regrets.  And I don’t.  Of course there will always be the things you wish you had could have done better, I’m not saying it’s perfect, but I’m proud of what we have achieved.
Q: You’ve said that “Apart from the novel which provided the initial inspiration, After the Waterfall is a 100% New Zealand film, and New Zealand will be our most important audience”. What makes it a New Zealand film?
A:  What I mean by that, is simply that the funding, and all of the cast and crew are from New Zealand.
Q: You’ve also said “Some people say my films are dark, but I say darkness has its own light.”  Can you explain this a bit?
A:  I’m obsessed with the truth.  A lot of people think I’m obsessed with the dark things in life, but my husband once told me, he thinks it’s because I find beauty in the truth.  But the truth is sometimes hard to take, it’s hard to look at, and it’s hard to live.   It’s especially hard when it’s about the dark places in our own hearts.  I am the Queen of Denial, denial runs in my veins like blood.  I read somewhere that you should never take a person’s denial away, denial is a form of necessary protection, and I know this to be true.  But I think there’s something we can learn from the dark places in life, but this knowledge—this light—is hard won.
Q: What will happen now, with After the Waterfall? When will it go on general release? And what will be your next project?
A: After the Waterfall had its world premiere in Beijing in June, and will have its New Zealand premiere at the Auckland Film Festival on 14 July.  There will be two further Film Festival screenings in Auckland and two in Wellington. We have a Facebook page which we will update with further news, and a website on the way.
I am currently working on a fantasy film called Black Skies Blue, which is based on a book my brother Dylan Horrocks is writing.  He pitched it to me while we were tramping in the Urewera, and I couldn’t get it out of my head.  I have extracted a portion of the plot, and am writing a ‘sister version’ of the story.   I went to Beijing for the premiere of After the Waterfall, and I loved it, I haven’t been so excited about a place since I ran away to London, so my new dream is to make a film there ...  But I am also available for work—I am so available!  Now that I’m out of the garret I don’t want to get stuck back there, I want to keep directing … anything at all.  No job too small.
Q: Is there anything else you’d like to add?
A:  Thank you.

You can book here.