It's that logo again! And more great news for women filmmakers.
Every year, the New Zealand Film Commission appoints three executive producer groups to select and  manage a total of nine projects funded through the Short Film Fund. Over the last few years, this programme has invested much less in projects written and directed by women than in projects written and directed by men (see 28 April post).

But the Film Commission has now announced eight of the nine greenlit projects—the ninth due shortly—in its latest newsletter. And YAY women wrote and directed four (57%) of the single gender projects selected and a woman will direct a fifth project, that she co-wrote with men. Here's the list:

(Do they know about writer/director Rachel Davies' Sweetness, one of my favorite short films ever? A classic: here's a still. View Sweetness here.) 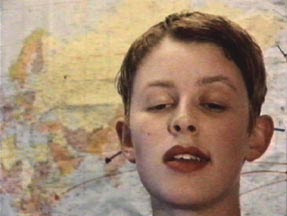 As well, Jane Shearer will direct Bird, one of the other selected projects, which she co-wrote with Greg King and Steve Ayson.

And it's great news for us scriptwriters that two of the four women's projects are written by women who are primarily writers, always good to see that.
It seems that the Film Commission may be moving towards equal funding for men and women writers and directors in all their programmes, and that's wonderful. The Commission may be the first state-funded film agency in the world to do this. But, because the changes have been so rapid, I have a few questions, & would be interested in yours: